I promised myself I'd go back...

...and I was running out of time.  We were still in glorious sunshine, but only for another day or so.  After that, the forecast looked depressing.

So Wednesday evening I leave Tod and the dogs and head south in the dark for Pau and the Pyrenees beyond. Thursday morning reveals a town smothered in pink for breast cancer awareness and clear skies over the mountains on the horizon. Pic du Midi d'Ossau, with its distinctive double peaks is my eventual destination. 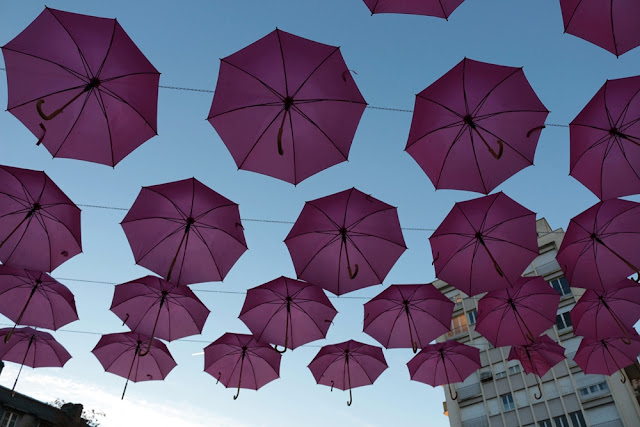 And those clear sunny skies stay with me as I revel in the glorious scenery and stop to take photos on nearly every bend in the road.

Bas Ossau (the lower Ossau) is green and lush.  The mountains hang back, leaving a spacious valley floor, populated with small towns and villages.

Looking down on Laruns 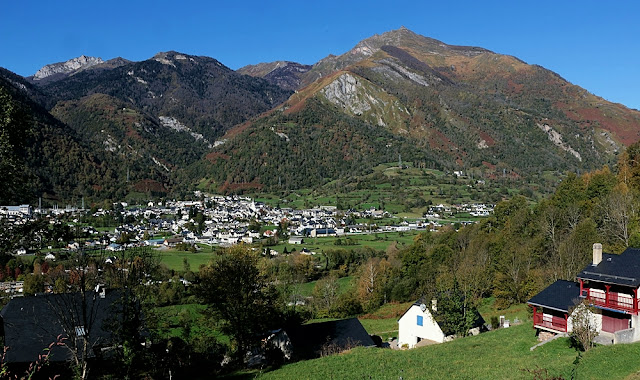 Higher up the slopes, Eaux-Bonnes a thermal spa made popular by Empress Eugénie now languishes in a scruffy, faded glory - the Hôtel des Princes a shadow of its former self. 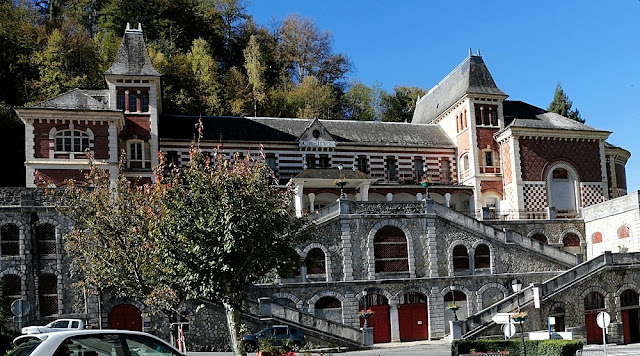 Eaux-Bonnes Hôtel des Princes now derelict and sold at auction in July for a mere 19,000 euros! 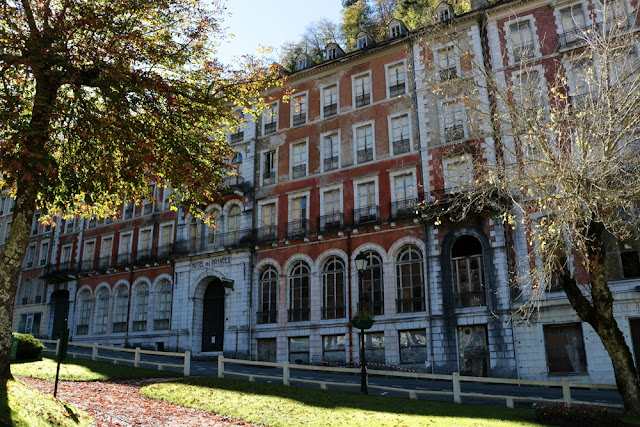 I travel on and upwards, following in the tracks of the Tour de France cyclists.  A pause on a sharp bend for a lunchtime ice-cream (the only food) and a Perrier at one of the few restaurants that are still open, I look back down on the ski station of Gourette - now a ghost town with its bars, hotels and apartments shut at the end of the summer season. 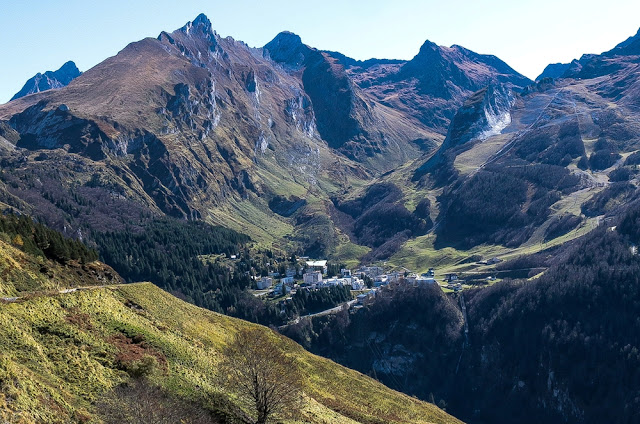 My destination is Col d'Aubisque, a mountain pass at 1,706 meters (5,607 feet) and most years a passage in the Tour de France. Giant bikes honour the event and make wonderful climbing frames for small children. I stroll up a grass-covered slope and look back down on the modest hotel and cafe - still doing steady business as late holidaymakers and tough whip-thin men who have cycled all the way up relax under umbrellas and drink in the views.

Col d'Aubisque with Le Soum de Grum to the right 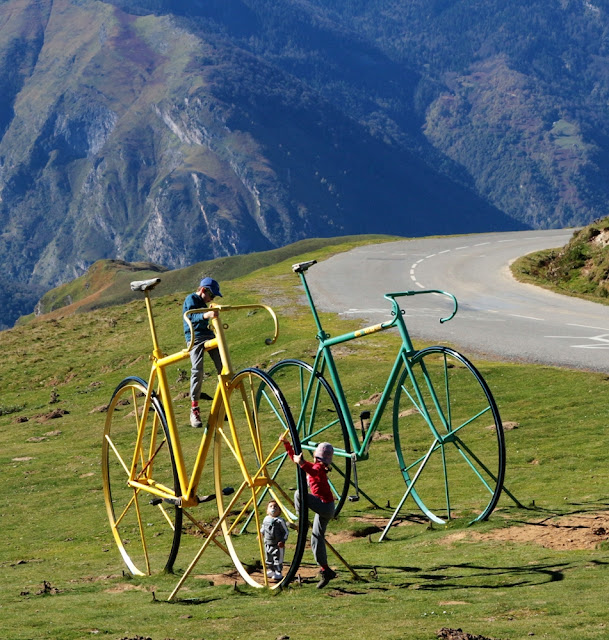 Friday dawns brisk - the temperature in single figures - as I set off for Haut Ossau (High Ossau), pausing at another thermal spa, Eaux-Chaudes, on the way. "Bonjours" are exchanged with a middle-aged couple cheerfully heading towards the entrance, towels under their arms. 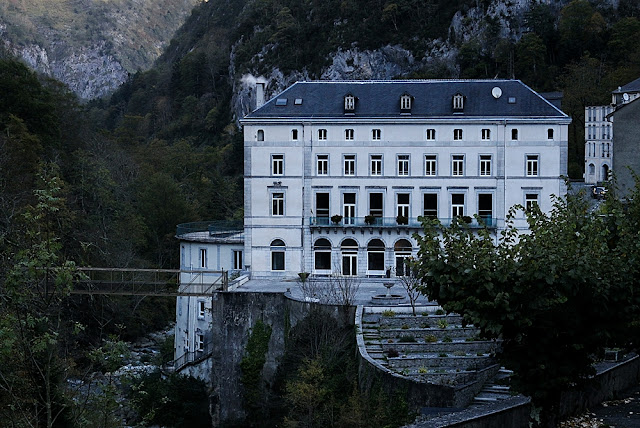 The mountains here press in on the valley and the sun is slow to come over the horizon.  When it does, the landscape glows in the late morning light. 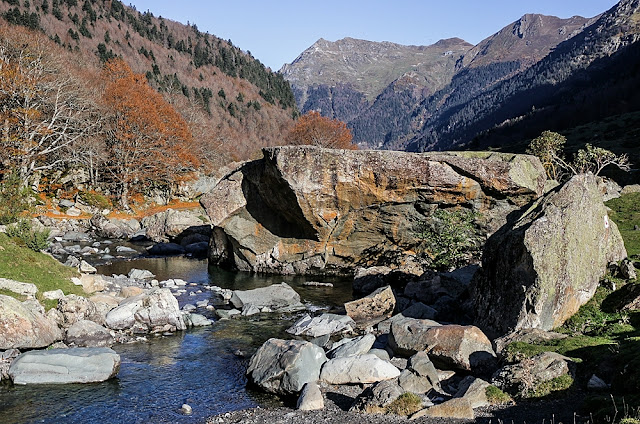 I'm heading for the Col du Portalet pass (1,794 meters, 5,886 feet) and the Spanish border (just so I can say I've been there). I cross into Spain to find a gaggle of French shoppers busy buying cheap booze from a huddle of small supermarkets. 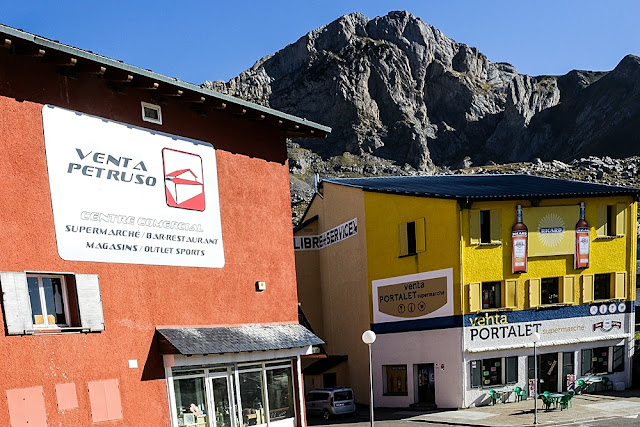 Pic du Midi d'Ossau from the Spanish side

Now on the Spanish side, I realise I am looking at a mirror image of the peak seen in the distance yesterday morning from Pau - I have arrived!

Time to head home, passing the occasional cow complete with large cowbell on the way. 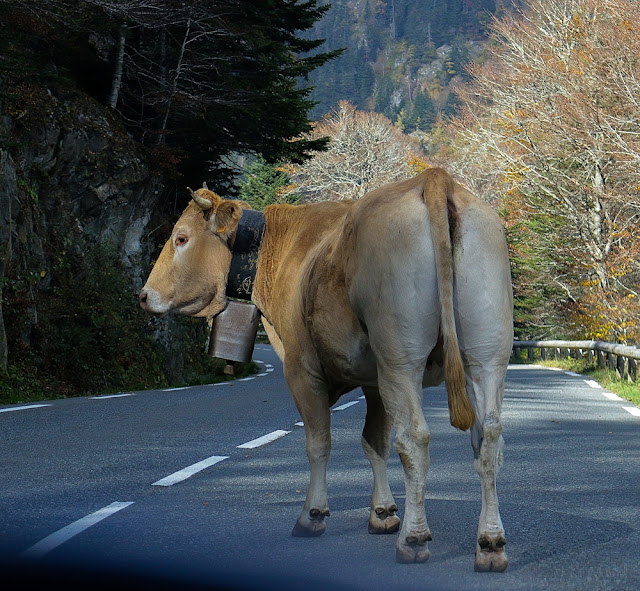 The weather is changing, the cranes are flying south and by the time I'm back on the motorway it's raining. These two last days of our Indian summer have been precious.

On Tuesday we're moving back down to the cottage for winter. 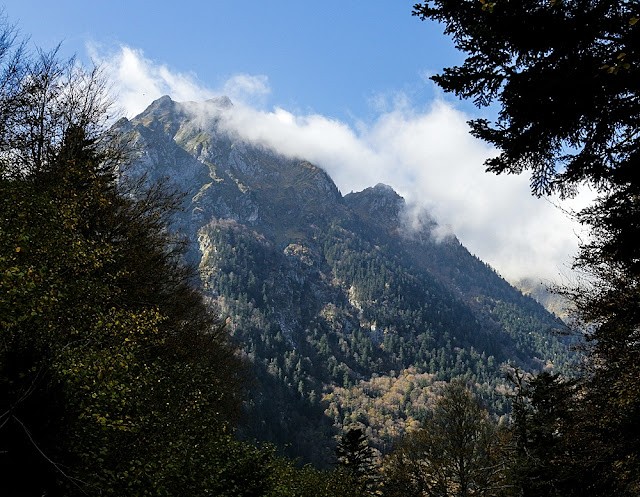 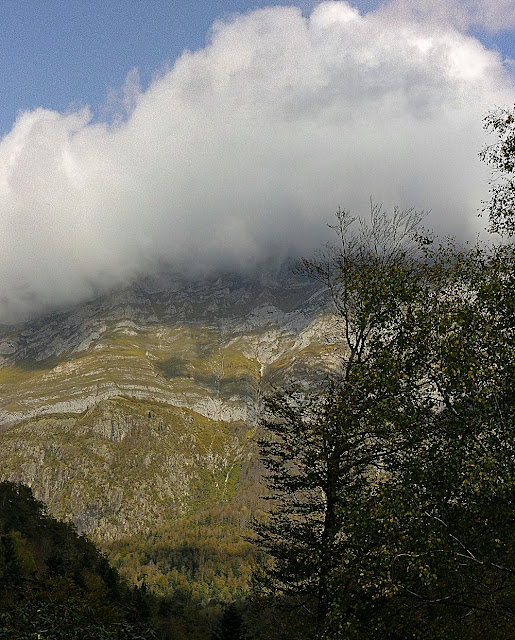