... of the door and immediately doubles back into the kitchen as the wind across the terrace hits her in the face. I know how she feels.

I tried some gardening for a while but then retreated inside, having watched a barrow load of carefully pruned and swept up dead twigs and dried grass disappear across the lawn. Too much like hard work!

But it is (at last) excellent grass drying weather, so I may venture forth after lunch with the strimmer and small mower and start attacking the banks and lawns around the cottage.  Who knows, we may have some guests this year after all.

It's also a good day for continuing to dry out the Skoda, which is sitting on the drive with all its doors open. We knew we had a leak but it was only after the January rains - when we found that the water in the driver's footwell (apt name under the circumstances) was coming over the pedals - that we realised just how bad it was and perhaps we ought to do something about it.  Once the electrics began to misbehave we knew it was very serious.  So the windscreen has been replaced and (hopefully) sealed properly. In the meantime, the water that's already in the car needs getting out.

Five full bucket-loads of our industrial vax hoover and there is still a squidgy feeling to the carpets, though no longer a pond. The solid foam underlay seems to have an infinite capacity to retain moisture, hence leaving all the car's doors open in the blustery wind.  I've also resorted to a hair dryer in an attempt to speed up the process.

Although coming from the south, the wind may be too strong for the cranes who are embarking on their annual journey up from Spain back to northern climes.  We were witness to some five to six thousand right overhead one late afternoon during the week.  Wave, after wave directly over our rooftop. A welcome promise of spring, as are the little daffodils that I am uncovering from under the dead twigs and grasses.  Their small size means that their golden heads remain defiantly upright, whatever the weather throws at them.

For the fourth time in the thirteen years we have lived here ...

... we witness what is supposed to be a "once in a lifetime" event - the flooding of the Garonne River.

Yesterday, the sirens in town sounded as the water rose to over nine meters (nearly thirty feet).  We have had so much rain in recent weeks and the ground is so saturated there is nowhere for the water to go except out over the flood plain.

I stand on the esplanade next to the bandstand and, with the town at my back, look out across an inland sea. 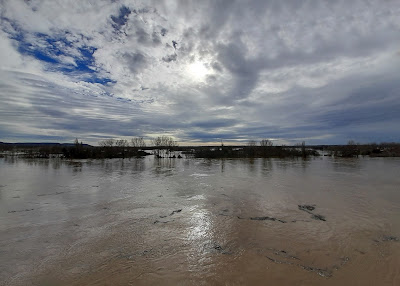 And Marmande, this morning.  We have never seen it this bad.