Yesterday, in my French lesson, Yvette quoted this old saying: "A la Sainte Catherine, tout prend racine." (I guess a rough translation is: "up to St Catherine's [day] everything takes root".)

According to the biodynamic calendar, November 24th and 25th are good "root days". So I've been out in the garden digging the holes for our six new fruit trees: two nectarines, two apricots, two cherries, which we'll be planting next Monday 24th.

The ground is damp and the fork is going in easily. Two spits depth, the earth is crumbly and full of fat worms. I think our new trees will take root very well.
Posted by suej at 16:12 No comments:

These are some of the flowers still blooming in the garden. 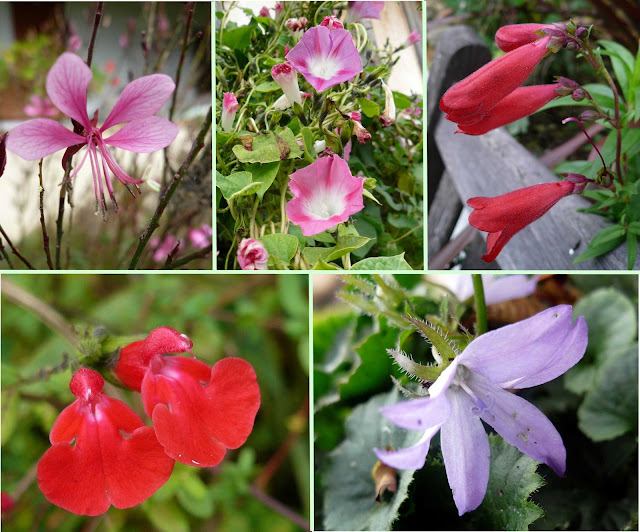 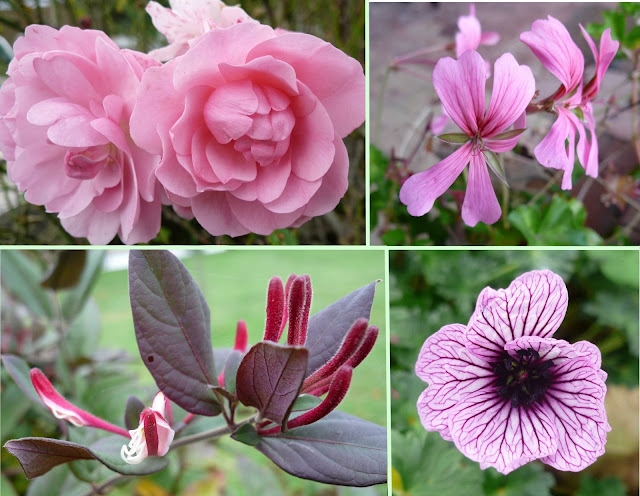 Yesterday we went to Bergerac to see EDF.

EDF are our electricity company. We have two electricity meters: one in the house and one in the derelict cottage. When we moved in, we didn't know we had two meters. And we didn't realise that EDF had started sending us estimated statements for the meter in the cottage, where the dial probably hasn't changed for years.

Trying to explain to an EDF telephone help line in broken French that there is something wrong with the EDF statement is a particular form of exquisite torture, not least because the person at the other end of the phone knows, with total certainty, that their computer is right and that the mad English woman on the phone is wrong. "Perhaps she has read the wrong meter? She has a water meter perhaps, and has read that? "
We made calls to the previous owners and copies of previous statements were sent. A year on, we discovered our other meter, hidden behind the broken front door of the cottage and we began to unravel the mystery. A visit by a senior meter reader was arranged. Copies of bank statements, direct debit arrangements and photos of the two meters were shown. The senior meter reader said he understood and left. And still the statements from EDF were wrong.

Then finally a breakthrough - we reached for help from French Liaison in Eymet and we were told about the well-kept secret of the EDF office at Bergerac where you can actually get to talk to someone face to face.

It's taken two visits, but we are quietly optimistic that EDF now understand.

And there are worse places to go on a bright autumn afternoon: open road, no traffic, hood of the batmobile down, driving between rust and gold coloured vineyards, with the occasional chateau in the distance.

By the River Dordogne 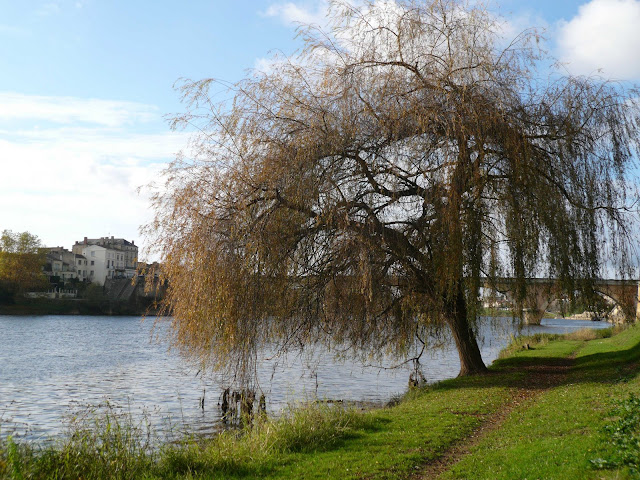 Went to Agen yesterday to buy a dressing gown. I arrived in the pouring rain just about noon.

All self-respecting French men and women were hurrying home for lunch and most of the small shops were closing for at least two hours. But these days one or two of the bigger stores, including Eurodif and Galeries Lafayette, stay open over the lunch hour. So, for those of us who loathe shopping, from 12 til 2pm is almost bearable.

I headed for Galeries Lafayette, passed the small pavement cafes, their empty tables and chairs puddled and dripping in the rain. I've only ever been to the store's ground floor before: an emporium of elegant accessories and a great source of presents (especially scarves) for friends in the UK.

Yesterday I ventured further: to the second floor and women's clothing. I stepped off the elevator to grey, grey and more grey - all beautifully arranged. As my eyes adjusted to the lack of colour, I began to see the occasional touch of red and shocking pink in the distance.

There was only one other customer on the floor. She was trying on a grey cardigan and talking to an assistant. Her eyes flicked over to me and I could see from her expression that I was found wanting. I caught sight of myself in a mirror and had sympathy with her silent opinion: wet hair, damp jeans, thick, shapeless puffa jacket and wellington boots. I looked like a Michelin man. Somehow even in the rain, French women who shop look smart.

I bid a hasty retreat to the basement and the dressing gowns. The one I've bought is fluffy, warm and soft pink. Not a very practical colour to wear while cleaning out the ash from the boiler in the mornings, but maybe just a touch of that French elegance.
Posted by suej at 12:37 No comments:

It's a wet Sunday morning and I'm pootling through the internet.

I started with "A Small Stone" and then got led off down various alleyways until I found "A Half-Remembered Life" and lingered to read about cauliflower soup, saunas, rabies vaccinations, Sweden and moose.


I'm supposed to be looking for recipes for pumpkin (not cauliflower) soup and pumpkin pie.


Tod went to see Monsieur M. who supplied us with our wood last winter. We need another load and at the end of a discussion that included visiting the pile of wood we are buying, Monsieur M. gave Tod a 16 kilo pumpkin. It sat on the table on the veranda for several days as I'd no idea what to do with it, but I've now decided it's the right weather for eating it.......


..... continuing on a wet and windy Monday afternoon


We attacked the pumpkin last night. The soup (including mild curry) was delicious. We used one segment of the pumpkin and that gave us enough for three helpings each. That left another nine segments to go. So today I've made my first ever, pumpkin pie, based on about four different recipes from the internet (the joys of broadband).


My pie-making needs a bit of fine-tuning. I should have puréed the pumpkin more thoroughly. The pie crust would be better baked blind first and perhaps a tad more sugar and ginger?


Still, there are another eight segments to practice on and several long-suffering friends on whom I can inflict the results. One of the pies will be for Monsieur M. 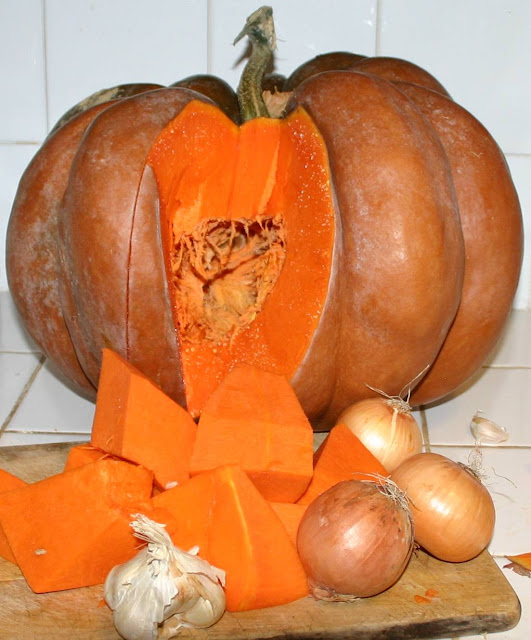