The French certainly know how to Party!

At midnight, when we'd just finished the wedding banquet and the dancing had only just started, it was a relief to realise that we would have an extra hour in bed to recover as this was the weekend the clocks went back.

We'd started at the bride's house just after lunch,  to meet and greet and have our cars decorated. Bride and mother - both with waists about the size of Vivien Leigh's in Gone with the Wind - stunningly attired in chic Parisian outfits, graciously welcomed their guests. Then, in procession with much tooting of car horns, we made our way to the mayor's office and crammed into the small room to listen to a long list of laws being read out at great speed and not much ceremony about the responsibilities of marriage.  This was then followed by an interminable photo session on the steps of the Mairie, coordinated by the bride's brother: "Bride, groom, bride's parents, groom's parents. Bride, groom, bride's immediate family. Bride, groom, groom's immediate family."

By this stage my camera had packed in and I teetered across the road in my extremely uncomfortable high heels (six years of living in sandals in summer and wellingtons in winter does nothing for feet and elegance) to the local tabac to refurbish the batteries, to find on my (slow) way back that I needed to break into a fast teeter as they were calling for "bride, groom, bride's parents, bride's friends".

The next stage was the church - a full sung Eucharist lasting an hour and a half. By this stage my feet were out of the high heeled shoes and resting on the cool stone flags. Unlike many English weddings where hymns are unconvincingly mumbled by a reluctant congregation, this service was led by a splendid cantor, sounding not unlike Joe Dassin, who imperiously waved his right arm in upward swooping movements at the moments when we were all to join in.

Somewhere about the exchange of rings the bride's brother started crying, closely followed by the bride and then the groom and several members of the congregation.  There was a hasty searching for tissues that were hurriedly passed forward, the figure-hugging, tiny-waisted Parisian wedding dress not having any hiding places for such items and there not being any bridesmaid (as is typical in France) to do the necessary.

By the end of the service, all were beaming smiles and again there was much taking of photos on the steps of the church. We wondered as we stood outside whether to pop home for a sustaining cup of tea and biscuit as we knew we were still several hours away from food, but we could not face running the gauntlet of the dogs who would wish to show their gratitude at our return with large muddy paws all over our elegant attire. I deterred Tod from crossing the road to the bakers to buy a croissant as I felt his action would not go unnoticed  by the bride's parents and he would be left with croissant crumbs over his beautiful new three-piece grey suit.

So we set off in convoy for the champagne reception.  I worried about drinking on a (by this stage very) empty stomach - unnecessarily as it turned out. The nibbles were hot, tasty, lavish and very tempting.  By the time we made our way into the hall for the banquet at 9pm I really wasn't hungry any more, which was a shame as the menu was foie gras terrine; followed by scallops and mussels in a wine and cheese sauce; followed by a HUGE plateful of pink lamb; followed by cheese; followed by profiteroles; all this accompanied by a different wine at each course.

Fortunately there were pauses between courses, the highlight of the entertainment being one of the uncles (who had played the solemn role of deacon in the service) somewhat surprisingly proving to have a repertoire of bawdy Pyrenean songs, which he sang lustily to the great embarrassment of  his wife and the younger female relations and friends.

The microphone was offered to our table - perhaps we wanted to sing?  We hastily shook our heads. So as a token to the English present the neighbouring table looked up "God Save the Queen" on their i-phones and sang it with great gusto.

By midnight as the DJ started up, we were already flagging.  So we bounced around to a few sixties numbers for a few minutes and then slipped away.  We're certain that most of our compatriots will have continued 'til dawn.

Bertie and Vita, convinced that we were never coming home, had gone hunting for food, raided the utility room, dragged the biscuit bin out from under the shelving, up-ended it over the floor and gorged themselves to a standstill.  Bit like the wedding banquet really.

I'd planned to write a slightly melancholic post about the changing of the seasons and the arrival of autumn, but then, between cool days of rain, it suddenly was so hot and sunny again I had to come in from gardening for ice cream, so the post didn't seem appropriate.

And I'm not the only one who's not too sure what season it is right now.  The mauve lilac up behind the house (on the bank that borders Monsieur F's now-ripe, bone-dry, rustling-in-the-wind maize) has decided to burst into bloom, to the delight of the local butterfly population.

So much for the distant sound from my childhood of my father singing: "We'll gather lilacs in the spring again",  as he accompanies himself on the upright piano in the lounge; a room only used for visitors or on special occasions such as Christmas.

I stand under the sweet smelling branches, struggling to capture clear images of the camera-shy peacock butterflies above my head as they flutter from bloom to bloom, gorging on this unexpected bounty.

I wonder whether we will be gathering this particular lilac again next spring? 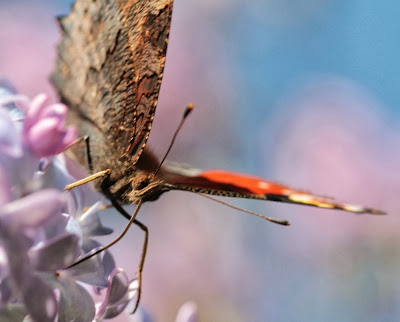 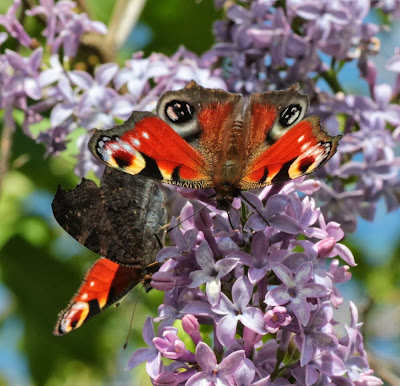 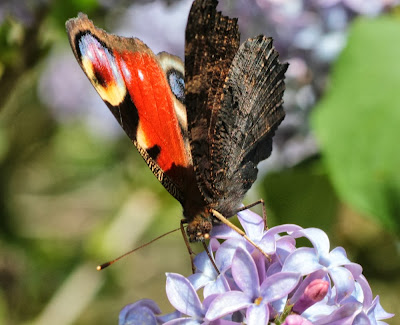 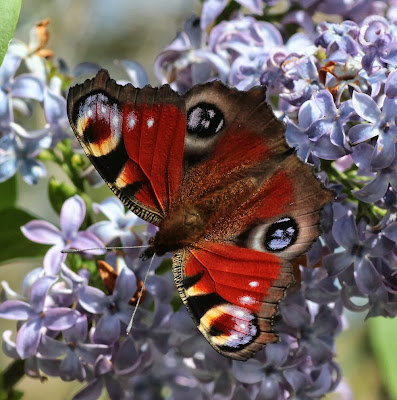 Two others  who dropped by whose names I don't know ... 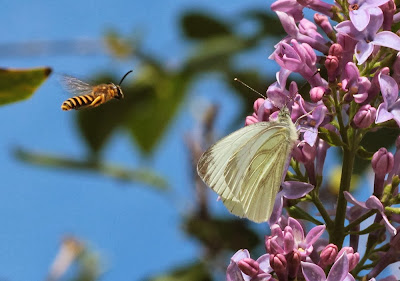 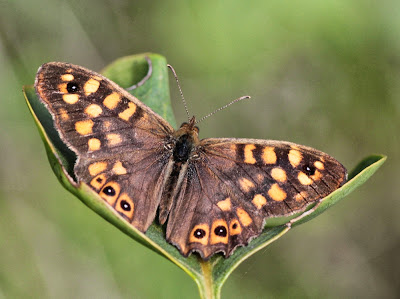