My father loved words and had a rich and extensive vocabulary. He was the son of a milkman, born at the beginning of the twentieth century into a family that believed profoundly in education as a means to improvement.

He excelled at school, not just academically but also in sports and, had he been born in another era, he would certainly have gone to university. But, at an impressionable age and from a poor family, he had seen the hunger marches in the early twenties and knew what poverty was, so believed he needed to get a job as soon as he left school.  But that did not stop him continuing to learn.  Books were his route to knowledge.

And that love of language continued right into his final months, even when of frail health and uncertain mental capacity.  We shared those final months when he and my mother came to live with us.

The "back garden" in our shared house was no more than a couple of stepped terraces, but at some point it must have been planted by a skilled gardener - each bush and tree chosen as the best of its kind.  And there, in the middle of a small border was a plant we had not met before - a purple smoke bush.  Or, to give it its proper name - cotinus coggygria atropurpurea.  My father delighted in remembering and rolling those Latin words round his tongue!

There has been a smoke bush in every garden we've had since.

I tried to plant one down at the cottage, in the border that you first see as you come down the drive.  I knew that, once large, its beautiful ruby purple leaves would catch the morning sunlight.  But the ground there is unforgiving - sandy and, even when dug over, full of builder's rubble - and I lost my first attempt.

I decided to try again, and nursed the new, small plant through last year and this wet winter. Imagine my delight as I saw new buds forming in these last few weeks.  Imagine my distress when two days ago I found two-thirds of the plant broken down!  Wretched deer!!!  They are lovely in the fields, less welcome in the garden.

The now much reduced smoke bush has a large fence of heavy-duty green plastic mesh encircling it.  Not very beautiful, but very necessary, I suspect for a year or two.  And the broken off piece?  Small stubby twiglets dipped in cinnamon powder (apparently useful as a rooting compound) are now on the terrace in a pot - maybe (fingers crossed) one or two may take.

Dad, I need your help please, from up there in your scholarly paradise, in looking after the twiglets and the small bush.  In a few years' time, when our guests ask me "what is that lovely purple bush with its delicate smoke-like flowers?" I want to be able to say, casually, "oh, that's our cotinus coggygria atropurpurea." And I will think of you.

When we moved here thirteen years ago, there was little or nothing in the garden except for an occasional plant stuck in the middle of lawn.

It made sense for the previous owners to have a garden like that (and many do round here).  The house was a holiday home, sometimes not visited at all for many months on end.  So gardening needed to be low maintenance - a quick whip round with the mower and not much else.  And with mild wet winters and warm early springs followed by baking hard clay in hot dry summers weeding large flower borders can easily become a full-time job. Not what one wants to be doing on a fortnight's holiday - and many of the locals feel the same, preferring to put effort and energy into their spotless, weed-free potagers.

So there, in the middle of the lawn in front of the house, was this dry, sad twig, which tended to be mowed over by mistake more years than not.  Further across was a muddled heap of honeysuckle.  So the twig and the honeysuckle became the opposite ends of a new, oval flower bed.

The twig, safe from the mower and given a chance to thrive proved to be a tree peony.  It's taken time, but this year there are nine flouncy pink flower heads, with promise of more for next year from fresh green shoots coming up from the base. Like the roses, peonies seem to like our heavy clay. 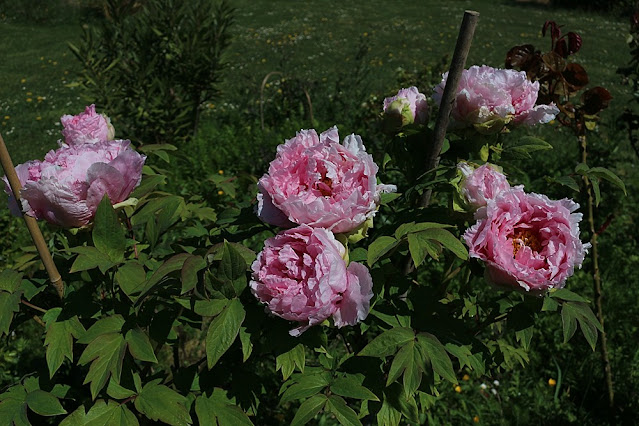