So, the decorations are down ...

... packed in plastic crates and waiting to go up into the loft.

The lounge looks denuded and needs a good hoover.  Bits of that long fine shiny stuff that everyone used to drape over Christmas trees (no, not tinsel) get everywhere and there are always one or two pieces that only emerge once everything has been tidied. Bertie rolls on the carpet and then walks away with glitter in his fur.

Before I finally say farewell to Christmas 2018, some photos I took at our neighbouring farmer's house.  First time I've been through their door (only taken 11 years) and he and his wife proudly showed me their conservatory - filled with a "Village de Noël".  They told me it takes about a week to put up and take down.  Unlike in the UK, there isn't the tradition here of taking down decorations on twelfth night.  Perhaps as well! She tells me her village will stay in place for another couple of weeks.

It's difficult to do it justice with still photos.  Many of the models move: roundabouts, skaters, an airship, a train, windmills.  Lights flash and Christmas carols pipe in competition with one another through tinny (and tiny) speakers. She has been collecting the models since her now grown-up children were babies and admits to being addicted.  I'm not surprised. 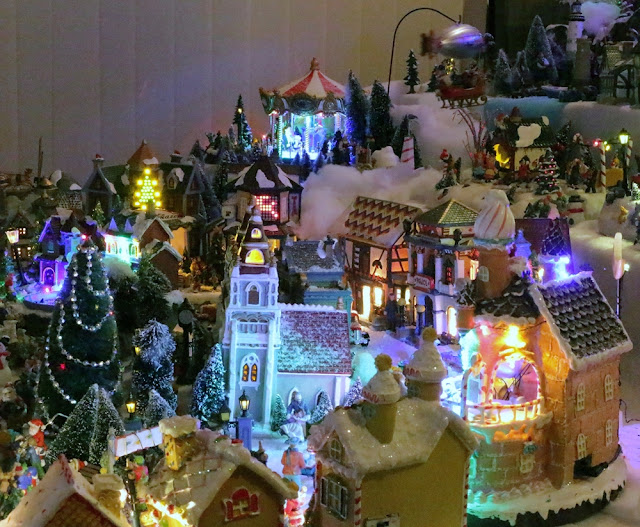 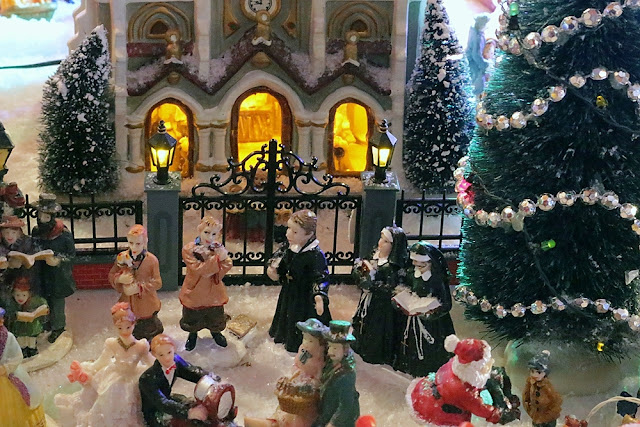 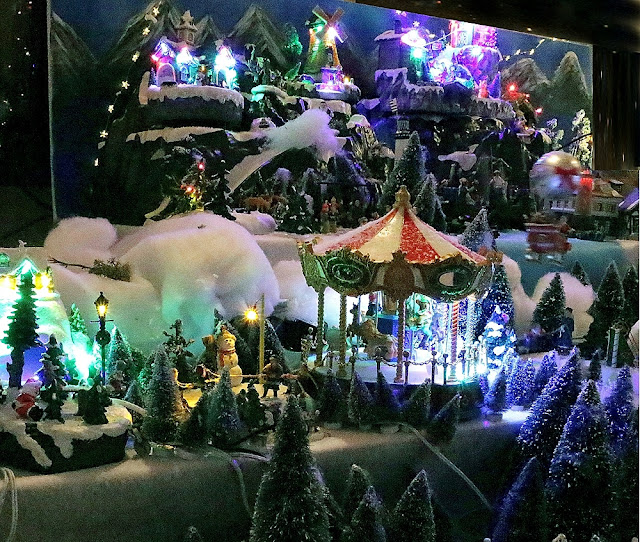 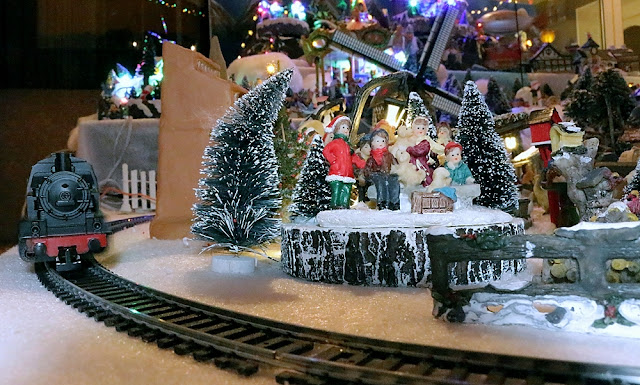 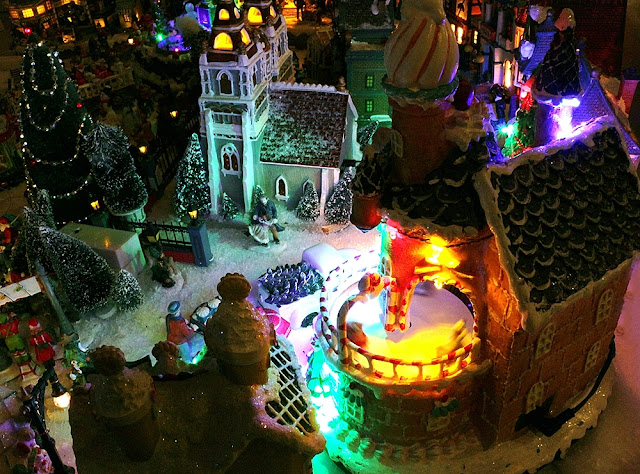 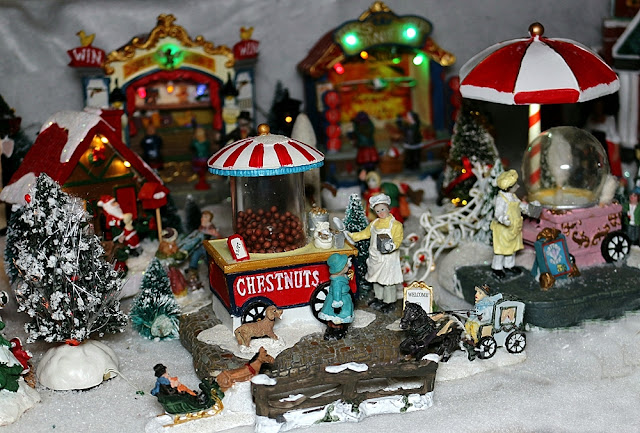 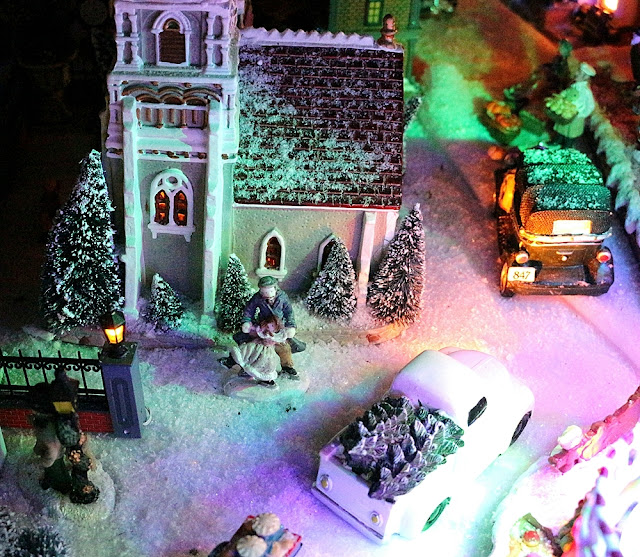 We Need a Dowser!

Despite the fact that it's winter (and very frosty) we are doing the best we can to stay warm in the house.  The cottage meanwhile is standing forlorn, empty and chilly with the power off.

Before Christmas, harking back to our flood in the hall last January, we thought it would be a good idea while the weather was still mild and dry to locate the mains cable under ground and do something fancy with pipes and drainage ditches to direct the rain water flowing through the ducting away from the cottage.

How hard could it be? After all, I took a couple of photos when the builders were laying the cable.  Both pictures show the red netting that is laid in the trench so that anyone digging has an early warning of what lies beneath. 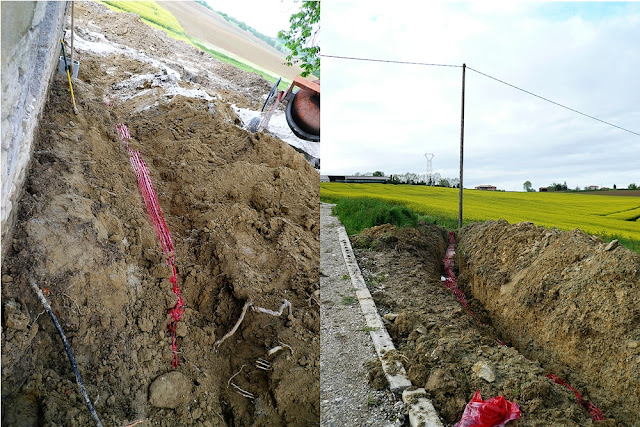 Where the cable passes in front of the cottage we now have a concrete pathway.  And that's also the same territory where the pipe to our septic tank goes, not to mention the rainwater from the gutters to our large underground tank.  So to dig in that area seemed like folly and we moved to higher ground, using the right hand photo for guidance which shows the trench dug from the electricity pole diagonally across what used to be Serge's land, down the slope towards the cottage.

SEVEN holes later, we are still no nearer finding the cable! 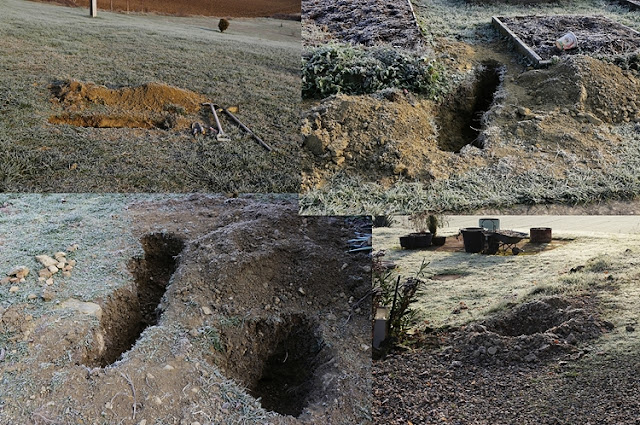 It looks like the Time Team* has taken over.  We expect to bump into Tony Robinson and a camera crew any day now.

And we now understand why it is the builders we asked to do the work for us have all been unexpectedly busy.


* Programme on British TV that follows archaeological digs over a three day period.  Tony Robinson is the presenter.
Posted by suej at 11:43 2 comments: