They came through in waves heading south and west towards where the Pyrenees reach down to the sea , moving fast, at the speed of the scudding clouds silvered by the moon.  I heard their cries right overhead but could not see them as I stood in the dark by the house front steps, clutching a pot plant. Cranes. Harbingers of winter weather.

Our mild November is ending. It's time to move the still-flowering geraniums into somewhere frost-free if I am to save any for next summer. I huddle the few remaining pots against the south facing wall of the cottage; maybe they'll be safe there for a few more days while I finish other more urgent tasks.

It's time to cut the last of the rose buds from the bushes by the swimming pool, still bravely flowering, and bring them into the house safe from the frost.

And it's time to shut the cottage shutters, curl up on the sofa, watch bad television and old movies in the warm and make plans for Christmas.

Bertie races backwards and forwards across the field, barking at the sky, chasing flocks of small, twittering, brown birds barely visible against the intense blue.

A buzzard lazily circles high above, mewing as it twists on ascending thermals.

The distant noonday siren in the town wails across the fields and the noise of drilling from the farmhouse across the valley that belongs to the retired police captain from Paris ceases - lunchtime.

A fat worm slowly squeezes its way between clods of earth that I've turned over, hoping I haven't noticed him.

The clay is perfect, neither too wet, nor too dry, falling easily off the tines of the fork as I work.

One of the trees came with us in the back of the lorry to France, root-bound in a large green pot; lovingly carried with us from house to house since the early nineties, when my father, then elderly and frail, helped me plant a small bowl with a tiny Cyprus and a few daffodil bulbs.  I seem to remember the daffodils towered over the little fir.

I think it would amuse my father to know it has survived all these years and is now six foot.  I could almost feel the tree stretch and breathe a sigh of relief as I teased out its roots to fill the hole I'd dug.

Dad loved France and things French.  He would find our sloping, swooping field on the side of a Garonne valley a very suitable final resting place for "his" tree.
Posted by suej at 20:06 2 comments:

My mother had an ancient brown Harrods box with a canvas strap in which she kept old photographs.  The box and its contents fascinated me as a child: those faded sepia images of elderly women in long dresses and bonnets; men with moustaches posing stiffly and uncomfortably in three piece suits; young men in uniform.

And then I forgot the box for decades.

After she died I found the box again and regretted that I had never asked her who these people were.  Which of these solemn-faced individuals are my great grand parents, great uncles and aunts?  Or indeed, from the age of some of the barely-visible images, my great, great grand relations.

My father's mother, Emily, had three brothers Edgar, Alfred and Albert and two sisters Caroline (Carrie) and Florence.  I remember Carrie, just, as a small, elderly spinster in a long black dress.  All I have of my other great-aunt and uncles are a few tattered picture postcards - "Dear Emmie, this is a photo we had taken at Eastbourne, we had a good time, will come and see you before long, from your loving brother and sister".  Yes, but which brother and sister? - and those images of young men in three-piece suits and then uniforms.

But there, among the unexplained photos and their many untold stories is one that speaks all too clearly. A cross in a muddy field of crosses with the words:

From the Commonwealth War Graves Commission I learn more. He is buried in The Huts Cemetery in Belgium, outside Ieper. The cemetery takes its name from a line of huts strung along the road from Dickebusch (now Dikkebus) to Brandhoek, which were used by field ambulances during the 1917 Allied offensive on this front.  Much of the cemetery was filled between July and November 1917 and nearly two-thirds of the burials were of gunners from nearby artillery positions. There are now 1,094 Commonwealth burials of the First World War in the cemetery.

Albert (the baby of the family) had joined the 17th (County of London) Battalion, The London Regiment (Poplar and Stepney Rifles) "A" Company.

He was just twenty-four when he died.


"They shall grow not old, as we that are left grow old;
Age shall not weary them, nor the years condemn.
At the going down of the sun and in the morning,
We will remember them."
Laurence Binyon 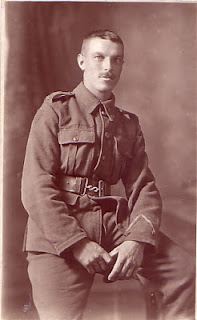 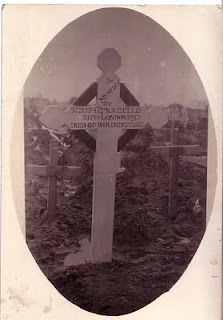 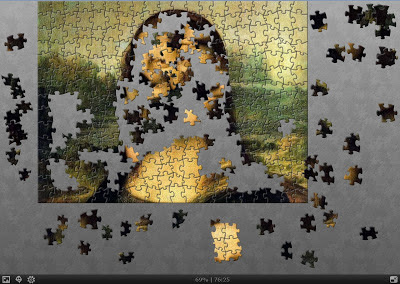 Starting a cold - Tod's brought one back from the UK and is sharing.

No more than three radiators on otherwise the power trips.

Dogs barking and scratching at the door to go out.

Dogs barking and scratching at the door to come in.

Dogs opening the kitchen door for themselves.

Only rubbish dog biscuits as alternative, so the dogs are hyper.

Time to go down to the cottage, but we're re-varnishing the wooden window and door frames and need to leave them open to dry.

Only a few more days and we'll be snug. 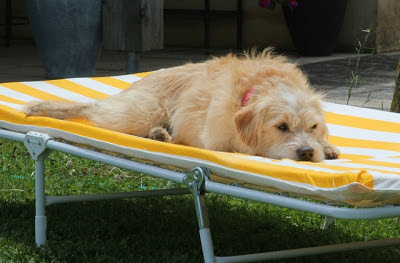