It's raining and I finally get round to doing some DIY. It's going well, but I then realise I need narrow wooden beading to hide a join.  Just time before supper to pop into the Brico store in town and get the job finished.

The man in the queue in front of me looks familiar.  He thinks he knows me as well and we exchange "Bonjours".  As he chats to the cashier I finally recognise him - Monsieur P.  We bought our Godin wood burning stove from him years back when he still had a small treasure-trove of a hardware shop in the town centre.  At the time he gave us a wrong estimate for the installation.  He'd undercharged us but refused to accept any more money.  In France a signed estimate is a contract, so that was the price.

Having sorted that out, I begin to listen to their conversation (not always easy with the regional accent).  They are talking about Coronavirus - isn't everyone - when Monsieur P cheerfully informs the cashier that his son's family has just flown back from Venice and voluntarily are now in self-isolation for 14 days.

I'm grateful that all we did was exchange smiles and greetings from a distance. However he did touch the cashier's hand, and the cashier touched my cash card. I wash my hands thoroughly when I get home and discuss with Tod what to do.  It may seem unnecessary, but I've decided to avoid our photo club meetings for two weeks and no Alexander classes.

Better safe than sorry - and my proximity to someone who has Coronavirus feels uncomfortably a lot less than six degrees of separation.

In the meantime, I'll do more DIY and some gardening.  Friends are offering to leave food parcels at the gate.
Posted by suej at 12:36 2 comments:

The Economist's cover this morning says it all ... 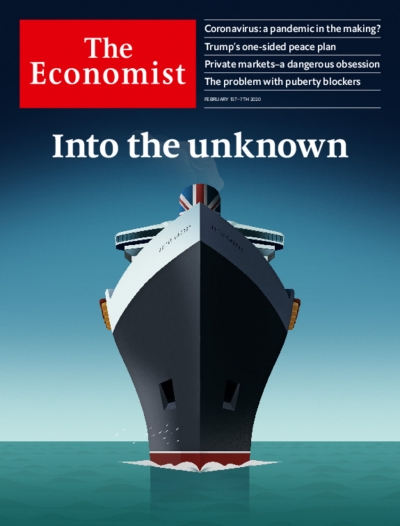 Well, yesterday came and went.  And the deed's done.

Friends in the UK ask us how we will be affected.  Not so different from asking someone on Day One how they will be affected by their divorce.  The question requires a shrug of the shoulders (ideally with a French flourish) and a "who can tell?" expression, followed by a murmured "ask me in a few years' time."

About the only thing we know for sure about Brexit is we cannot vote in the up-coming local elections in March.  Shame.  We will have a new mayor, new staff in the office and several new councillors  and it would have been good to have been showing solidarity and commitment to our local commune.  Once he's elected (assuming it's a he) we'll have to pop into the office and introduce ourselves.

Otherwise, life goes on much as normal and the uncertainties - healthcare, pensions, freedom of movement (or not) - remain to be resolved.  We will be required to change our cartes de sejour, so laboriously applied for just over two years ago, for new residency permits.  We are reassured by the French government that those who already been through the process will go through minimum hassle.  No doubt though we will need new photos, fingerprints taken again at the prefecture in Agen and yet again Tod's fingers will not scan properly and they will struggle to find a way to confirm he is who he is.

The hiatus of the last three years has been painful and there is still much anger on the ex-pat forums.  Some feel it's time to move on, get over it, stop whinging, whilst others say why should they when there has been such an injustice.

At least, now though we can begin to move forwards, even if it is into the unknown.  There is to be a discussion this coming Friday at our local language club.  It will, no doubt, be something of an anticlimax for the French audience since most of the answers from the English will include a Gallic shrug and a "we don't yet know".

I'm glad all our gite guests have already booked their holidays with us for this coming summer.  A gentle reminder and reassurance that our lives will continue and, day-to-day, there will be much that remains the same.