... clutches at the stem of a plant whose name I can never remember, watching me balefully.

I'm strimming between the shrubs that are growing on the bank which was covered in tired mounds of mallow when we first moved here and he's not impressed that I'm clearing his territory.

My approach to the garden is Jekyll and Hyde - part of me wants to leave everything weedy and overgrown (as the bank has been for the last umpteen months) so that all the birds and insects (and tree frogs) thrive but another part wants it all neat and tidy - clipped box hedges and not a weed in sight.  The latter me is winning at the moment, spurred on by having watched three episodes of Monty Don's "French Gardens" on the BBC.  How do the French keep those vast parterres so impossibly neat?

Bertie is doing his best to create the "natural look" further along the bank - bottom skywards as he frantically tears a hole between lumps of sandstone and old roots.

The bank needs more shrubs.  Those that I planted (what? three, four years ago?) some have thrived, others are struggling and judging from the gaps as I strim back the dead thistles and tall grasses, not a few have died. A trip to the tiny, elderly lady who runs a nursery behind the prison in Villeneuve is called for - her prices are half those elsewhere.

The weather is idyllic for planting - weeks of rain, so the ground has been saturated, followed by mild sunny days.  And everything is springing into life - hence the need to strim.  I'm itching to get on with pruning all the roses as they are already smothered in tiny red leaves but winter hasn't completely released its grip, we're promised sharp frosts for the next few nights, so I'll wait a few more days.

It's time for the cranes to start flying north.

The Rhythm of Life

There was a meeting this week on how to restore old furniture to get that French "shabby chic" effect.

I was really looking forward to it.  We've got one or two bits of tatty old dark furniture that I have been eyeing but not doing anything with.  So this was an ideal opportunity to learn how to restore them.

I knew when the meeting was - first Wednesday afternoon in the month - because there is nearly always a meeting then - except through the summer when everyone has visitors and not in January when people are still recovering from Christmas. It's a bit like the W.I. and there are always interesting talks (not at all like Calendar Girls) and a chance for a cup of tea, a slice of cake and a gossip.

And then I forgot.

Not that I was doing anything more important. I'd decided that the fig tree alongside the cottage needed attacking so that any new growth (typically five or six feet a year) would be a sensible height for reaching the figs.

I suddenly realised I'd forgotten as I came back inside at dusk.  And I felt quite disorientated and disappointed.  Tod goes off to French lessons Wednesday morning and I'd watched him go - so at some point in the day part of me had realised it was Wednesday.  And I knew it was no longer January.  But somehow, this week had not transmuted into being the first week in February.

The same thing happened to Tod a few weeks back when he was really looking forward to going with friends to the excellent self-service Chinese restaurant in Villeneuve. I mocked when the day came and went without his noticing and now I've done the same.

It may be evidence of early senility. But it's also a change in the rhythm of our lives. So different from the hour by hour measuring out of all those years at work. Here, the days gently ebb and flow. We notice the change in the seasons (the lengthening of the days, the milder weather) more than the days of the week.  And although there are routines - Monday morning rubbish day, French for me on Tuesday afternoon and Tod Wednesday morning, Friday my photography, his bridge - the weeks all too easily slip by without having dates to them.

It is not enough to put our appointments on the Airedale calendar that hangs on the wine rack in the kitchen. Because as like as not it still shows January. And here we are eight days into February.

There is an extra frisson to this increasing detachment from the day to day.  Next month, at the same first Wednesday get-together, Tod is giving a demonstration on making sour dough bread.  At least one of us had better remember on the day!

some of Tod's bread 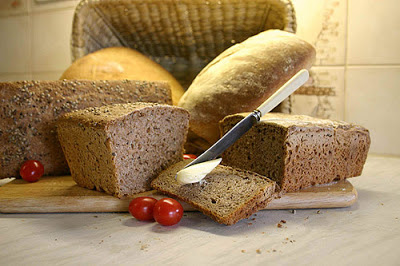