With the new short hairdo ...

... I emerge from water looking less like The Thing From The Swamp and I decide I can risk heading for the sea.

Bordeaux and the Gironde are categorised a "red zone" in COVID terms.  Not really sure what that means in reality but it seems like a good idea to avoid it and I decide to head south and cut across the Landes to the coast.

Mimizan Plage looks like a good destination and Google optimistically tells me the journey time is just over two hours, with the road more or less in a straight line.  Three hours and several wrong turnings later, I emerge from the endless kilometers of gloomy pine trees (people choose to live here in these dank clearings) to a small, cheerful seaside village.

German voices mingle with French. Taut-muscled tall young men come for the surf but - unlike in August when it is heaving - the place feels delightfully half-empty.  Strolling the main street, I'm reassured to see most people are wearing masks as they hunt for end of season bargains on the clothes rails spilling out on the pavements. Middle-aged, overly-tanned women finger floaty beach wraps and strappy long dresses while their husbands perch, bored, on the walls of municipal planters.

I'd thought to head for a remote beach, but there's no need.  From the esplanade I can see acres of deserted sand, so I happily descend the steps, trek to an empty space and pitch my socially-distanced tent. Towels, swimming costume, sun hat for when I wander back into town later for an ice-cream, Lidl's small cool bag, complete with ice packs and what's left of lunch (most of it eaten out of boredom on the interminable journey through the pine forests), Kindle with a Julian Barnes novel I'd forgotten I'd down-loaded. The occasional foray into the sea with my new, sleek hairdo and I am blissfully set up for a long, lazy afternoon. 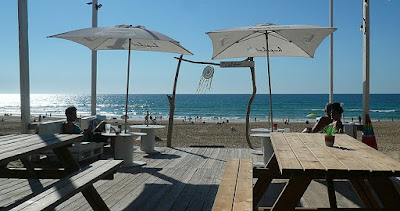 For the first time since, well it must be ...

... at least March and possibly even before Christmas, I have had a hair cut.

It was beginning to look fairly wild.  I could have auditioned for Back to the Future - The Musical.

I felt it had finally become safe to approach the salon in the Leclerc entrance hall where I usually go. The tourists have left, children are back at school and Tuesday lunchtimes once again are a haven of tranquility.

Arrows on the floor in one direction only, alternate reclining seats by the basins blocked off, disposable capes, carefully wiped combs and scissors and (of course) the obligatory masks.  I recognise the stylist's eyes over her mask - she's cut my hair before.  No glossy style books to look at, which are usually my visual aid: "I'd like that one (pointing) but the length more like that one (on the following page)."  I struggle to explain through my mask and wonder does "dégradé" mean layered?  Anyway, she seems to understand and steers me towards the wash basins.

It's all more functional - no relaxing head massage - just get the client in and out as soon as possible.  I ask her how it's been and she says, "you get used to it", with a typical Gallic shrug. The mask elastics over my ears hold no fears for her.  I wonder how she avoids cutting through them, but she has done this hundreds of times by now.

And the final result?  Well worth it. I'm now more Michael J Fox (albeit not that hair colour) than Doc Brown. 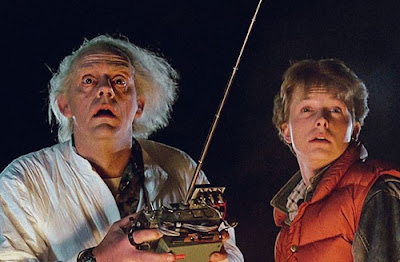