Two years ago, one of our photo club (French) members suggested we did a "then and now" exhibition of the village where we hold our meetings. Some two hundred postcards from the early twentieth century were available and the suggestion was to take the same shots today.

Reactions to the idea were muted. How "creative" is it to stand where someone else stood over a hundred years ago?  It would be a lot of work. It would take over from other club activities.  And so, we (English) procrastinated and hoped the idea would go away.  Until an article mysteriously appeared in the commune's annual newsletter, saying the club was doing the exhibition and the mayor told us how thrilled she was.  So we were (reluctantly) committed.

It was all the things we feared - hard work month after month, finding the exact same places where the original postcards were photographed.  Interrogating Google street view; taking advice from local historians; tramping the streets trying to find "just" the same angle; sending letters to absentee chateaux owners asking for permission to photograph; fighting through brambles and unruly scrubland to get the "right" view; sharing what we'd taken and realising we needed to go back and try again - this became our lives for much of last winter and spring.  And still there were grumbles - where was the photographic creativity in all of this?

It was agreed with the mayor's office that the exhibition would be for the whole of this summer, so by late spring we were holding evenings where photos were printed and framed - the empty plastic crates under the tables gradually filling with pictures, old and new, ready to hang.

And something magical began to happen. We began to realise that what we were doing was quite special.  We began to appreciate the skills of those early photographers and how, with our modern cameras, we struggled to recapture their wide angles, their depth of field.  We learnt so much about this small village - and saw it with new eyes.  The vistas that are identical to those of 100 years ago. Others that have changed out of all recognition.  The old butchers shop that no-one had noticed has become a lovingly restored grand mansion; the streets that have been renamed after the two world wars; the railway line that has vanished and the station that's now a private house; the country lanes once shaded with great elms that have become urban thoroughfares.

At the preview the mayor, near to tears, thanked us and told us how important the exhibition was for the village, for those locals who would see their own history and for visitors who would learn more about this community.  We smiled, thanked her and secretly believed her words to be hyperbole.

Exhausted by the whole process, I have not been near the exhibition until visiting friends ask if they could see it.  While they stroll round, I wander over to the table with the leaflets and the visitors book open at the most recent, complimentary, comments. Curious, I turn back a page, and then another, and then another - I'm looking at twelve pages of scrawled handwriting - enthusiastic, grateful, flattering - every comment telling us how much they appreciate what we have done. The mayor was right.  Our hard work has been worth it.  So much so, that we know of at least three other communes in the area which are planning to copy us.  I wonder if they realise quite what they are taking on! 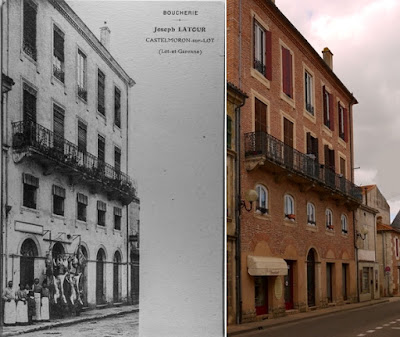