In the more than seven years we have been living here, I have always assumed that the small game birds which foolishly run along the chemin rural in front of our car their legs going nineteen to the dozen (you would have thought flying, or diving into the ditch alongside would be the safer option, but no) were quail. But apparently not.

Our neighbour stood on the veranda late one evening holding an opened package mistakenly delivered to them rather than us.  We talked of the start of the hunt season and his six hounds. He stroked an astonishingly well-behaved Vita while she sat and gazed at him adoringly.  As he departed, Bertie trotted happily alongside him, so much as to say "this man is much more fun, he'd take me hunting".

It was only afterwards that I remembered. This was the neighbour whose wife said our dogs had killed their goat.  Whatever the truth, he at least no longer bears a grudge and a small feeling of relief touched my heart.

And it was afterwards that Tod and I had the conversation about the quail.  I had said "caille" and our neighbour had disagreed, cupping his hands in the shape and size of the birds we know and using another word which we didn't recognise but thought began with a "p". So not quail. But what then?

An online French dictionary and a bird sound website gave me the answer: perdrix - partridge. I had imagined they were much bigger, more like a pheasant.  It's those Christmas images of over-sized partridges perched in pear trees which confuse.

And their sound confirmed it.  That chucking noise they make while standing on top of a clod of ploughed earth, so much as to say to the hunters: "come and get me". They are the most reckless of birds! Quail, I learn, are much more sensible and stay hidden.

The postman brought us two gifts that evening with his misdirected parcel - neighbourly peace of mind and a new insight into our local fauna. 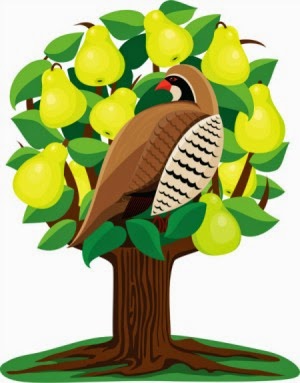 Bertie charges down our field ...

... yelling his head off, running alongside the tractor with its harrow kicking up clouds of dust, daring the driver to bring his machine any closer.

I sympathise with Bertie's opinion.

The field, which used to be Serge's is now owned by the pig farm the other side of the valley.  Earlier in the year, I watched nervously as the new owner's tractor cut deep furrows on land alongside our boundary that Serge had left fallow and I had assumed was ours. I indignantly looked again at the plans of the land we'd purchased and had to acknowledge he was right.  His land comes to the point of the ditch at our gatepost. And he's going to take every inch of it.

The wire to our oh-so-necessary electronic fence lies in his field, not ours.

The tractor driver swings the harrow round over our boundary as it comes to the corner by the ditch. He is young, with heavy rimmed glasses - more like a medical student than a tractor driver.  Not anyone I recognise.  The pig farm owner's son maybe?  We raise a hand to each other in greeting as he turns away up the hill.

Once he's finished I discretely move the wire back onto our land.

No doubt in a day or two he will come by again with the dogs' extra-special delight - pig muck - to spread over the field.  From then on a fully functioning electronic fence will be essential, if we are to keep Vita and Bertie out of what they view as a gastronomic paradise.

I stir the saucepan with the sticky mixture of quince cheese bubbling gently over a low heat and the breeze is warm coming through the open door of the kitchen.

Tod's sourdough breads are cooking in the oven, filling the air with a yeasty, beery smell.

Later, as I rake up the conkers down at the cottage I am grateful for the shade of the horse chestnut tree across my bare shoulders.

The farms around are already cleared of their crops except for the sunflowers, which are scorched black and bent double.  They too will be gone soon.  And then where will the family of quails and the hare who sits on our chemin rural taunting Bertie hide from the guns that start in earnest next weekend?

We talk about going to our favourite crêperie this evening, to sit outside in the courtyard in the fading light - a rare treat this year. There won't be many more occasions between now and the end of September when she closes til next April.

In August, when friends stayed, we supped indoors, had soup, turned on the underfloor heating and worried that their summer-weight duvets were not warm enough.  They left as the warm weather that vanished at the end of June coyly returned.

I have forgotten what it means to have to water the pots along the veranda every evening.

We regret our friends did not come in September.  And then the muck spreader starts work in the neighbouring fields.  And we think, lovely though the weather is, perhaps it was as well they didn't come this week!

Promise of soup for the autumn