... we are living in the film "The Shipping News", which by the way if you haven't seen I can thoroughly recommend. Kevin Spacey is on top form as a slightly bemused man who, with his young daughter and aunt (superbly played by Judi Dench) goes back to the family home on a remote cliff top in Newfoundland.

The old Newfoundland house is held down by guy ropes to keep it from flying off the cliff in the high winds and at night creaks, groans and sighs, keeping the occupants awake.  For the last twenty-four hours that's what it's been like in the cottage.  Bertie, Vita and I got little sleep last night as I resorted to a duvet and the sofa in the lounge. The constant thrumming of the aluminium drain pipes and the shrieking of the wind through the shutters kept all three of us on edge - while Tod slept blissfully through it.

Debris is all over the garden and a couple of the dead elms in the small copse behind the cottage, covered in ivy where the small birds nest, are now snapped in two and doubled over - as is a brand new concrete electricity pole up on the ridge behind us.

I found the plastic greenhouse that I bought from Lidls tilting precariously to one side, all the contents in a jumble on the floor.  So taking a tip from the film, the greenhouse is now held down by an improvised guy rope stretched across the roof and tied on one side to a wooden pallet and the other to an old plough.

Although the high winds are still with us, I'm hoping that I'm tired enough to be able to sleep through the noise tonight.  Tomorrow is the Big Day - Tod is demonstrating making his sourdough rye bread and I want to be wide awake for it.  But more of that anon. 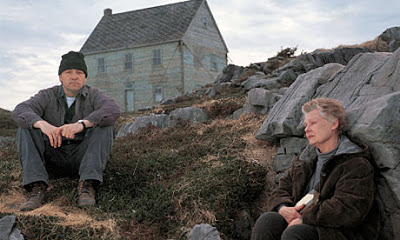 I peeled off my pink Marigold gloves and, with aching shoulders and feet, staggered downstairs to Tod saying I'd had more than enough of stripping flocked jungle paper off the back bedroom walls and please could we go home for lunch.

Up a ladder in the lounge, surrounded by strips of bright orange wallpaper, he agreed. So, locking the front door, we set off home in our two cars (extravagant I know, but we'd been running different errands).

As I turned out of the side street I met a queue of traffic crawling through the town centre, every other vehicle a white van.  This was unheard of.  We never meet heavy traffic in town - particularly not on a Monday when most of the shops are shut.

Then I happened to notice the clock on the dashboard. Three minutes past twelve. Ah!  The Frenchman's rush to get home as soon as possible for his two-hour lunch.

The Turn of the Seasons

Paul phoned.  To say the cranes had just flown over them and would be with us shortly.

I rushed downstairs, grabbed a coat and the dogs and I tumbled out of the front door.  And there, sure enough - the first I have seen this year - a great black V, coming out of the western sky, stretching wide. Too distant still to count individual birds but close enough to see how the group ebbed and flowed, broke and reformed.

They followed the ridge on the other side of the valley and I quickly counted, guessing ten, fifty, hundred, two hundred, three, maybe four hundred of them. Vita barked at their cries, uncertain where their unsettling sound was coming from and not thinking to look above her head.

And then, as I turned to come back indoors out of the cold, I saw another line, this time heading straight towards us, bird after bird after bird, right over the cottage, driving forwards, on, on north and east to their summer haunts.

Tonight I will sleep with the window open and even through my dreams will hear the sound of their cries as they pass in the dark.
Posted by suej at 00:07 4 comments: