We were scraping off the old flaking layers of paint and plaster from the stone wall in the dining room and could hear her outside.  She barks at anything that invades "her" space - birds, distant tractors, Monsieur F or his father, pieces of paper blowing across the fields.  As she eventually calms down, we've learnt to take no notice.  But we'd nearly finished for the evening and I was on my way back down to the cottage when I realised she was barking at a small elderly man in an electric wheelchair who was driving slowly back up our drive from the cottage.

Our local town is a centre for people with major brain and physical injury who nevertheless drive themselves around in their wheelchairs.  But that's in the town centre.  He was some eight kilometres from home, down our track.

I grabbed Vita who was dancing round him and asked if I could help him in my best French but could not understand his guttural, garbled response.  So after a rapid conference with Tod, I set off to see our neighbours at the top of the drive to ask for their help, Tod and the man in the wheelchair slowly following.  Madame informed me that he had first visited them and asked for directions back to town.  They had told him, but he misunderstood and headed down our track (which goes nowhere).  As I wondered what to do, she offered to phone the pompiers (firemen) to see if they would help. The answer was "no, get a taxi".  Difficult if you come with an electric wheelchair.

By this time Tod and the wheelchair man had arrived.  Madame roundly ticked him off for going so far that he needed help to get back.  She rather brusquely pointed him in the direction of town.  So off he set.  She did however relent enough to make a call to the gendarmes, who informed her that it was "normal" for local wheelchair occupants to travel around and no, they would not come out and help.  Travel to Leclercs for shopping, that's "normal", but eight kilometres into the country?

I feared for the battery on his wheelchair and imagined all sorts of dire situations with oncoming cars round blind bends, so decided to set off after him in the merc.  He'd got surprisingly far by the time I caught up with him.  He was, again, heading in the wrong direction, down a dead end so I offered to follow him slowly (hazard lights flashing) to make sure he stayed on track.

Driving at four kilometres an hour behind a wheelchair, heart in mouth in case we met a car on our narrow roads, gave me a very different view of our local countryside.  He waved at the occasional passerby, we were overtaken by an elderly lady on a bicycle and (thankfully) very few cars.  At a cross roads when we discussed where to go next, we both feared we'd taken the longer route, but for the sake of his battery it was too late to turn back.  The small additional distance that meant nothing in a car suddenly seemed endless  I was gradually getting better at understanding what he was saying , including "Thank you" in English.  He might not be able to speak clearly, but that did not mean he couldn't understand.

After an hour, we reached the safety of town and he knew where he was. So I left him, cap on his head against the afternoon sun, trundling off down the centre of the road towards his home.

Talking about it later with Tod, we wondered at the attitude of our neighbour, the pompiers  and the gendarmes but then gradually realised that perhaps they were right.  The disabled in our town have their independence.  But that independence comes with responsibilities and an expectation that they will cope.  The robust view is by all means go out for an adventure, but also make sure you can find your own way home.
Posted by suej at 17:03 No comments:

These sunny April days have slipped by, full of busy-ness:  gardening, shifting pebbles for the cottage parking area, painting the kitchen up at the house, choosing tiling.

We snatch moments on the terrace outside the cottage, tea mugs in hand, faces to the sun and listen to the news about the Icelandic volcano and wonder about friends who have trips planned or are expecting guests in their gîtes. The fig tree by the terrace has woken up and is covered in translucent green leaves and new small fruit pointing up towards our empty blue skies.

The days merge and we struggle to remember the day of the week. Our lives increasingly move to different rhythms.   We notice Monsieur F is a predictor of weather change - if he's out with his tractor there's a good chance of rain later.  The swallows are back and these warmer days are filled with bird and frog song.  The frogs continue long after dark but the nights are still too cool for the nightingales.

Somehow last year's geraniums have survived neglect and dust from all the building works and are now trimmed and repotted, bursting with fresh greenery. I may even get some new plants from the trimmings.

The small shrubs I planted early in the year alongside the steps up from the cottage terrace peer out from under a covering of rampant weeds and grass.  Reluctantly I admit I need a roll of black ground cover fabric so beloved of French gardeners. It's the only way my precious shrubs will stand a chance.

The lawn above the cottage is a mass of thistles.  Dandelions thrive in the lawn by the swimming pool.  Tod swings his (very necessary) new toy - a mulching lawnmower - across the lot with gusto.

The pool, with its new salt water system, is clean, clear and inviting.  Still much too cold for swimming, one evening I sit with my feet dangling in the icey water, soothing an ankle sprained when shifting pebbles.

The garden is heavy with perfume from the lilac and wisteria, barely noticed this year tucked away behind builders' rubble and scaffolding.  I'll take some of the suckers from the lilac to help fill the acres of bare earth now cleared by the builders, where Vita stalks moles like a cat, one paw raised, quivering in anticipation.  The dug up stumps from the buddleias lie discarded, but I've lopped their branches and stuck them in odd corners on the banks in the hope that they strike.

Today is the first day it's rained in what feels like weeks.  We're off to Agen to buy a beautiful chandelier for what will be our new entrance hall.

Our furniture is coming out of store mid-May.  Not long now. 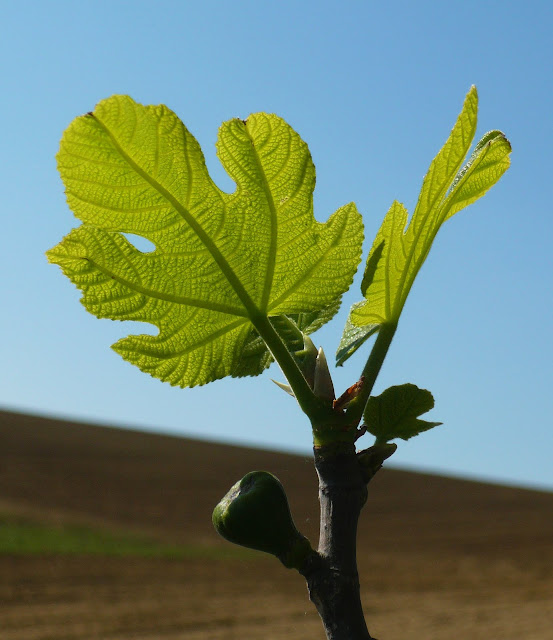 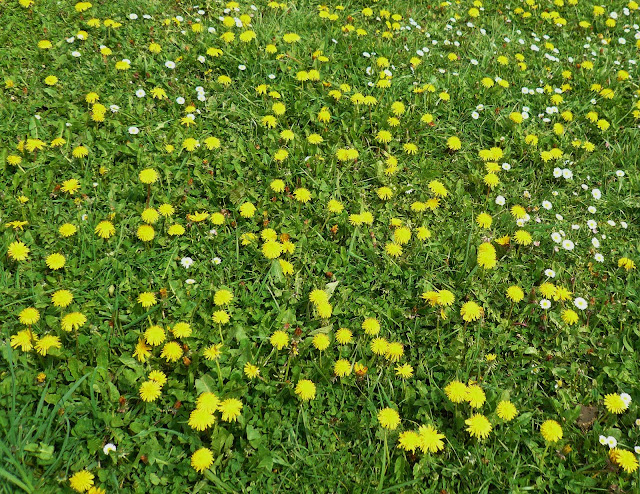 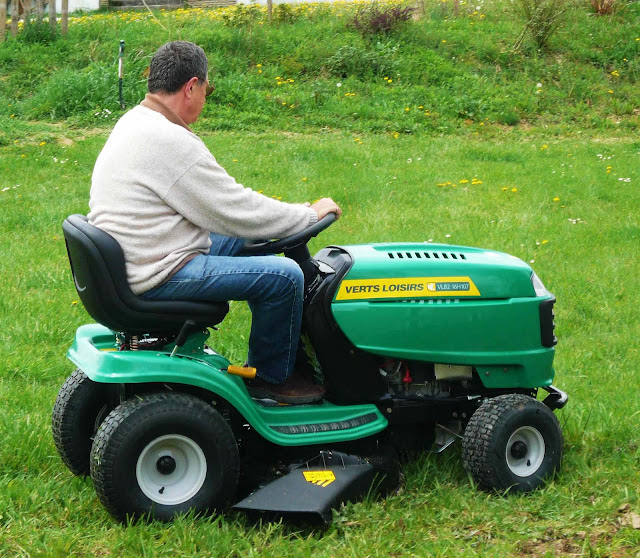 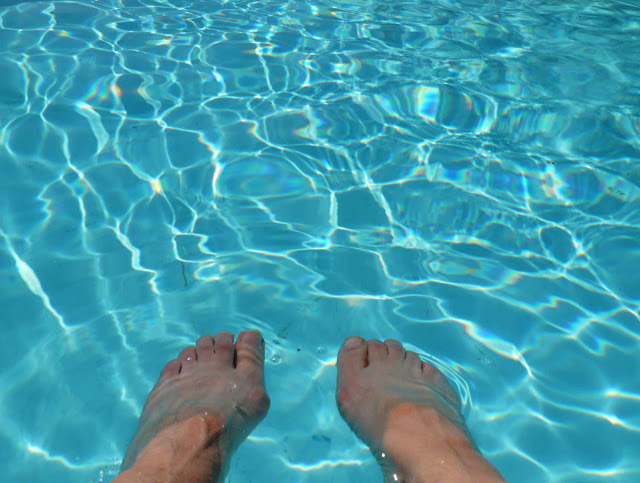 In a moment of wild folly a few weeks ago I said I'd do a session on Cassini maps to our local newcomers' club - in French.

So over the last few days any moment not taken up with weeding (rain and sun and the weeds are going "whoopee") was spent on putting together a powerpoint presentation and then painfully translating word for word what I was going to say.  An hour of sheer terror when I thought I'd deleted six hours work didn't help.  Thank heavens for the IT section of Total France and a calm suggestion from Debbie: "look in the recycling bin".  Then Yvette and I went through it all in yesterday's French lesson.  I took Tod's slot as well as mine, as our progress was slow.

Anyway I did it last night, to a small friendly audience who seemed to catch some of my enthusiasm for these amazing maps and seemed to understand most of what I said.

So today it's just great to pootle, catching up with gossip on the forums I read, posting to a couple of blogs, including an update on the house restoration.  I can even look with equanimity on the new batch of weeds that I'm sure weren't there yesterday.  I may go out and pull up a few.  Later.

Links:
Cassini Maps
And Now the House
Posted by suej at 12:02 No comments: