I've finally cracked it! Today I made a proper Polish cheesecake.

The cheesecakes we had in Poland were wonderful - light, full of flavour and not too sweet.

Tod bakes a great cheesecake, but his recipe is American, has lashings of sour cream on top and is very rich. It also comes with a biscuit crumb base, whereas many of the cakes in Poland have no base.

Over the last few weeks, I've been trying various Polish recipes from the internet, but each time the cheesecake looked great as it emerged from the oven - like a soufflé - but then collapsed as it cooled. 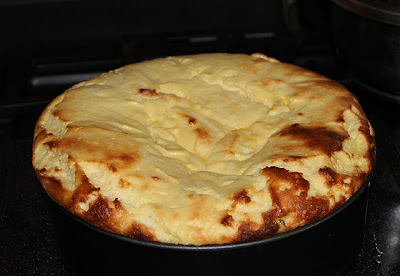 But today's sernik was perfect.  The trick I've discovered is to bake the cake at a much lower temperature than most recipes suggest and for much longer and not to over-beat the egg white.

So here's my recipe for the perfect Polish cheesecake....

- Five eggs - separated
- About a kilo of cottage cheese (here in France I use Faisselle which is very wet, so I strain two kilos of it overnight through muslin, which brings the weight down to about a kilo in total)
- 70 gm caster sugar
- 110 gm butter
- 70 gm sultanas (some recipes suggest soaking the sultanas in brandy)
- one tablespoon of potato flour
- one tablespoon vanilla essence
- zest of one lemon

Beat the sugar and butter until nice and creamy.  Add the egg yolks one at a time still beating the mixture.
Add the strained cheese to the butter/egg mixture and beat to a smooth texture.
Add the sultanas, potato flour, vanilla essence and lemon zest and beat again.

In a separate bowl beat the egg whites until they are just stiff (but don't go on any longer) and then fold the beaten egg whites into the cheese/egg mixture. Spoon the mixture into a buttered and flour-dusted cake tin.

I use a nine inch diameter cake tin with deep sides and a removable base. I butter and flour-dust the sides and bottom and then line the sides with a double layer of baking parchment.

Most recipes suggest baking at 180°C or even hotter for about 40-50 minutes and this is where I found the frothy mixture rose too much and too quickly and then collapsed.  So I now bake at 140-150°C for about 90-100 minutes until the top is just beginning to brown and feels springy to the touch. I also leave the cake in the oven to cool.

It's a struggle to get a French bottle gas oven cool enough and the settings are not subtle, so I have the regulo just below "1" and put the cake tin on the middle shelf on two layers of newspaper and have a tin of water in the bottom of the oven.  This slows down the whole baking process, means the cake rises more slowly and stays risen and light. And tastes great! 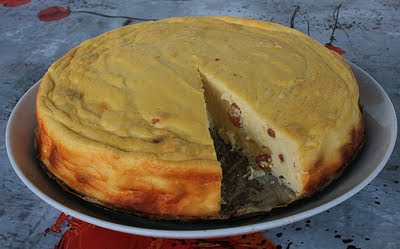 Tango in the night. On a cold July evening in Bordeaux, under the Monument aux Girondins. 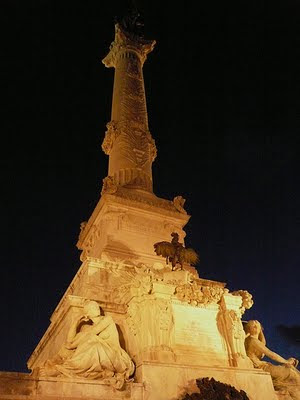 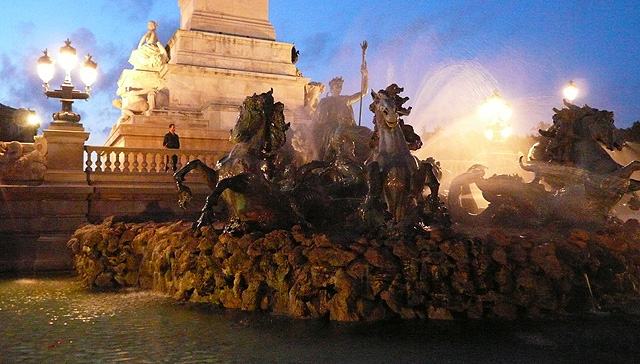 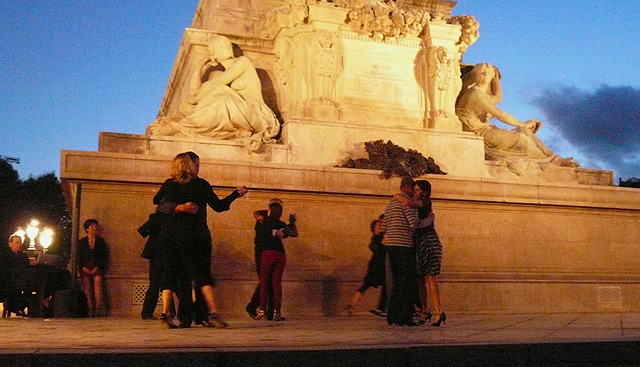 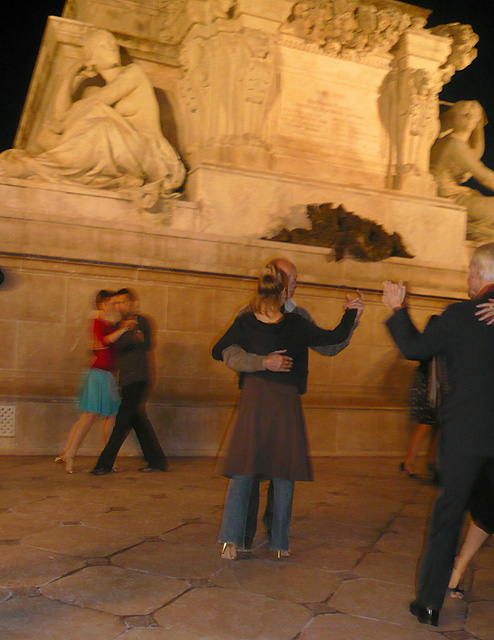 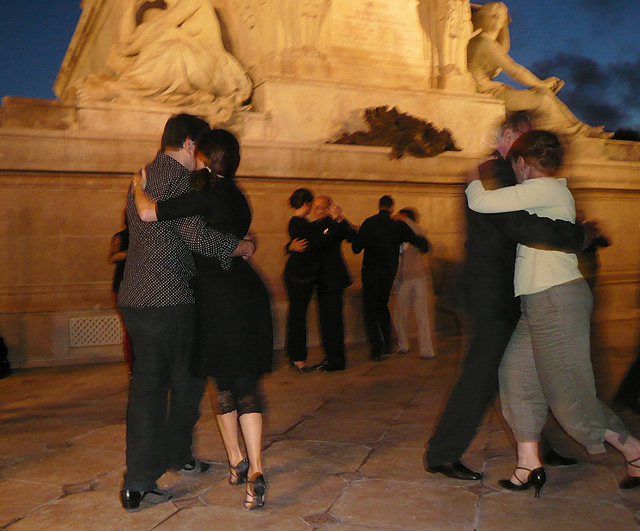 Vita Helps with the Cooking

Vita lays at my feet, head to one side and resting on her left paw, as I peel the charred and sticky skins off the roasted peppers.  They'll be marinaded in lemon juice to mingle with the red oily sweet tasting juice.

She watches as I turn the sizzling aubergine in the hot oil. Coated with a dash of chilli flakes, cumin, coriander, balsamic vinegar and honey, the slices turn satisfyingly soft and translucent with a crisp outside.

The French beans (her favourite) steamed and lightly fried in butter and crushed garlic are ready and cooling on the window-ledge.

Tod has the finely shredded carrot and sliced mushrooms bubbling gently in something orange and alcoholic on the stove.

The pastry case has been blind baked, waiting on the kitchen table for its creamy contents of beaten eggs, butter, sugar, shredded coconut and pineapple, to be cooked to a golden brown and eaten this evening with crème anglaise.

In previous summers we would have been setting the table on the veranda for our dinner guests but this evening we will be indoors.

As another squall of cold rain tears across the garden from the north west, over the tops of Monsieur F's maize, battering plants in its wake, Tod reminds me of all the prayers for wet weather by gardeners throughout France and says: "Be careful what you wish for."

With all the wonderful smells above her head, Vita's wishing that something will fall earthwards.
Posted by suej at 14:51 5 comments:

We have two bats.  We've always had two bats in the four years that we've lived here.  Well there was a brief period at the beginning when we thought we had only one, until we saw the two together.

Then late yesterday evening, while filling the watering can in the near-dark, against the still pale western sky I saw four bats playing above the wood store - two normal bat-sized bats and two small, with that slightly anxious fluttery motion like baby birds: "Look Mum, I can fly!"  I think we have a bat family.

I walk towards the open garage and suddenly there's a loud cheep and a scuttling noise.  A baby redstart peers at me from behind the spokes of the bicycle wheel next to the empty gas canister.  His mother flutters and clucks at me from the top of the garage door that we now keep permanently open until her brood has flown.  As we do with the doors into what one day will be our hallway, but at the moment is the nesting place for another redstart who has (at last count) four fledglings in there peering down at us from the rafters.  This is the second lot that she's had in there.  We really do need to manage our wildlife better.

Tod comes back from his early walk with Vita on the lead.  He's seen three black kittens in the mown field next to ours.  I watch anxiously as the mother hunts through the stubble - her jet black body visible for miles against the pale straw - she and her family a target for every buzzard and crow.

Then this evening, I see with some trepidation (the French can be brutal to feral cats) the young farmer's wife from the cottage two fields over walk down the valley to where they are playing. She kneels down and taking off her jacket gathers up the small black balls of fluff, cuddling them as she does so.  Husband and friends arrive to help and they all walk slowly back home, mother cat running alongside.  I think the kittens will be safe.

So Vita can walk off the lead again; just as long as we keep her away from the open garage and entrance hall for a few more days.
Posted by suej at 23:23 2 comments:

Some years, there are just a few of them, the odd patch here and there.  This year, they are everywhere, to delight the eye and warm the heart. 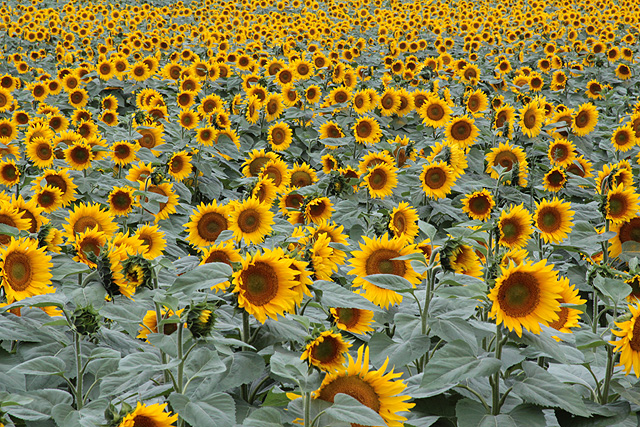 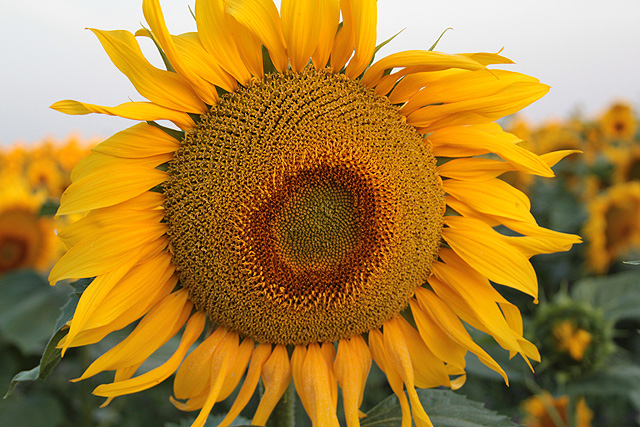 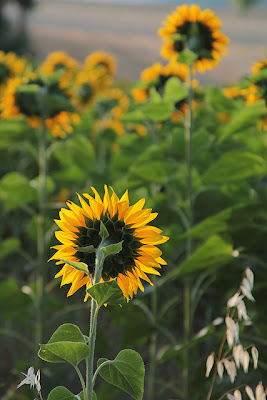 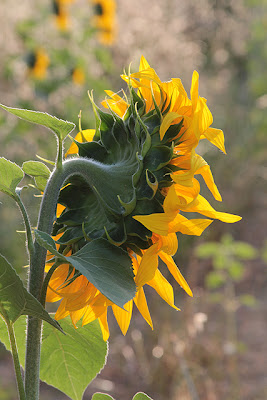 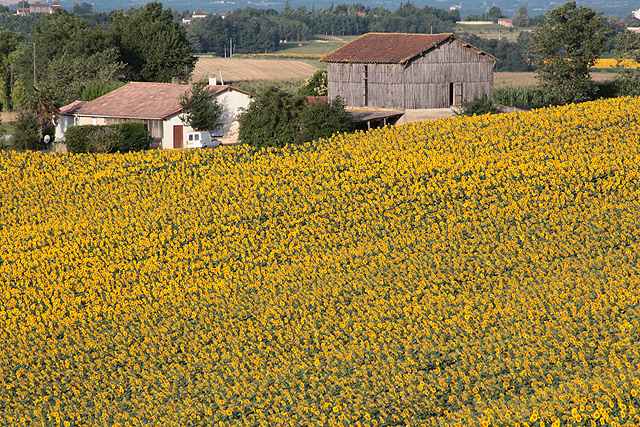