Edge of the Cyclone

The wind is whipping round the cottage causing the aluminium drain pipes to make strange thrumming noises like a deep double-bass. There is the occasional crack from the roof.  Hopefully the new tiles can stand the gusts.

I've been up to the house and checked that windows and shutters are secure and looked anxiously at piles of loose planks and bits of plasterboard on the veranda. They will have to look after themselves.

Patches of rain rush in and rush out again in between scudding clouds with rose-pink linings from the late afternoon sun.

A blackbird is singing lustily from the brambles.

I can hear the background "aaaaah  aaaaah aaah" from the sodden rugby crowd at Twickenham on the TV downstairs.  Tod is nursing a cold.

People are nervously posting on the French forums that tonight's cyclone will hit the Gironde and Charente coasts with winds of 150 kilometres an hour.  The storm will then turn north.

We are slightly to the south and east, so the brunt of it should pass us by. Even so, we are in for a noisy night of vibrating drain pipes. 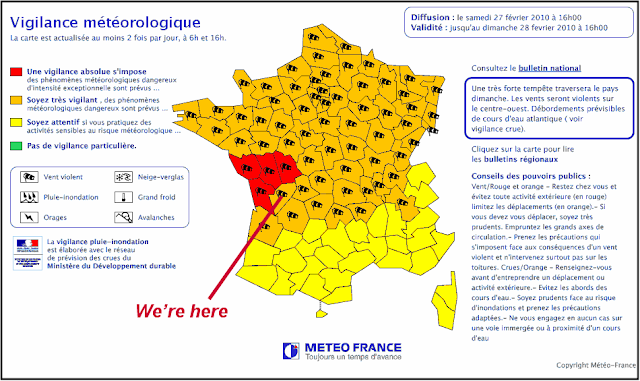 Three skeins of cranes flew over us during yesterday afternoon, returning north - two to three hundred in each skein heading for their summer quarters in Germany, Poland, Scandinavia.

Today there's real warmth in the sun through the cottage window as I sit here typing this and I have to angle the monitor away from the light to see what's on the screen.

What am I doing indoors, when I could be in the garden?

Links:
"The cranes are coming..."
Five Hundred of the Forty Thousand
Posted by suej at 11:21 No comments:

... the butterfly border is no more.

Our farmhouse is built on an outcrop surrounded by fields sloping down to the stream in the valley bottom. The outcrop is sandstone covered with clay and in places, including the bank where the swimming pool is sited, the clay is gently on the move back down the valley.


In the nearly three years we have lived here the small already-repaired cracks around the swimming pool pump house have steadily widened and the flagstones have lifted and split apart. The repaired slits in the wall of the raised butterfly border at the far end of the pool have broken open. It is only a matter of time (and probably not a long time) before the pump house slides down the bank into Monsieur F's field. So we decided better to ask Eric to take it down before it falls down.


We expected to find that the foundations were shallow - hence the slippage. But no. Eric and Phoebe battled to dig the pipes and electrics out of deep, robust concrete. The builders of the pool knew what they were up against, but the movement of the clay is inexorable. We considered putting down piles to see if they might hold things steady, but their weight might just give the clay extra momentum. So we're moving the pump house from the far side of the pool to the butterfly border end, where it will be away from the bank.

The pump house was always too small. Tod had to bend awkwardly to turn the stopcocks on and off. He grazed his knuckles against the wall in releasing the clips around the pump. So now we can have a sensible building that he can stand up in.


We also don't have any shade by the pool except for a few umbrellas (which never seem to have their shadows where needed). So now is also a good moment to build a covered shelter, where we can hang a couple of hammocks and have afternoon tea in the shade when the temperature's in the thirties.


We also realised last night that we can change the pool from a chlorine to salt-water system. Great. No need for harsh chemicals anymore.


So for the moment the butterfly border has had to go. The shrubs have been severely pruned, dug up and are sitting in a pile waiting to be transplanted to the long sunny banks down beyond the cottage. I think the butterflies will like it there. 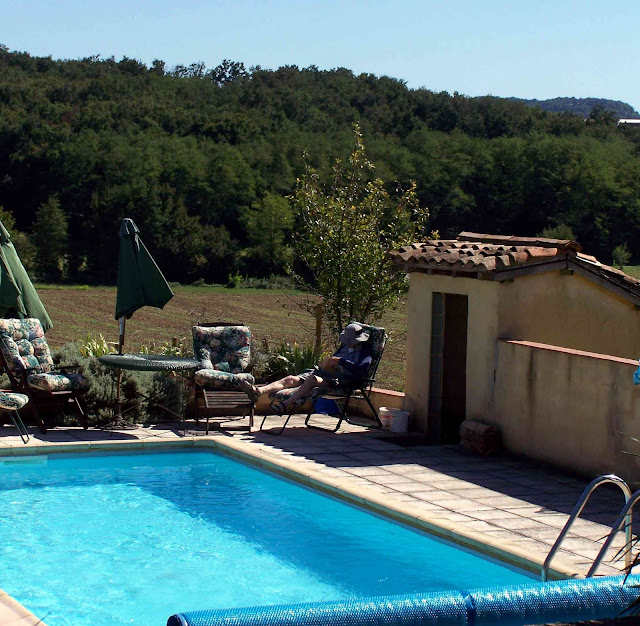 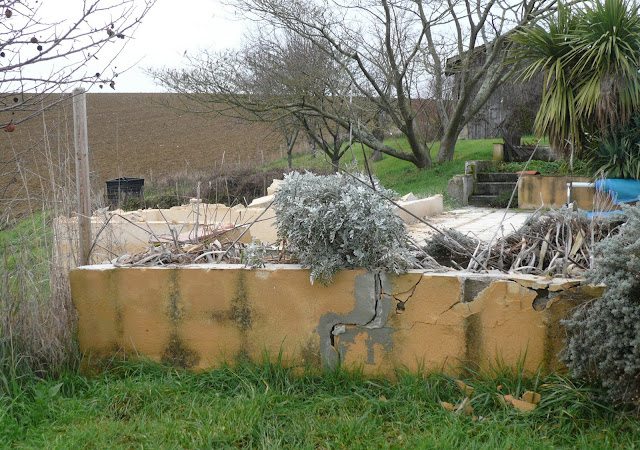 The pump house no more 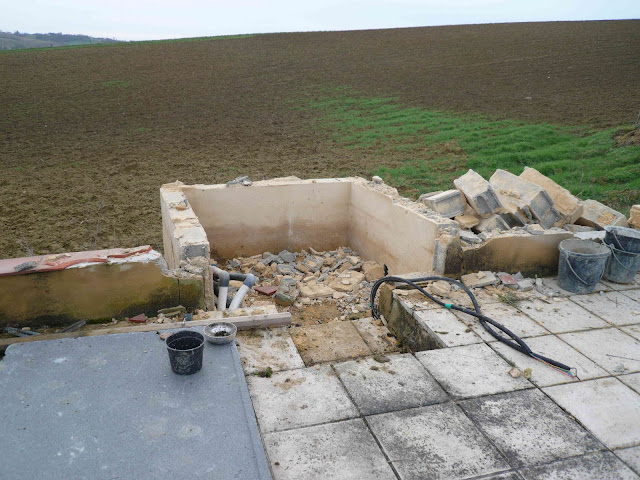 The beginnings of the pump house and the shelter alongside 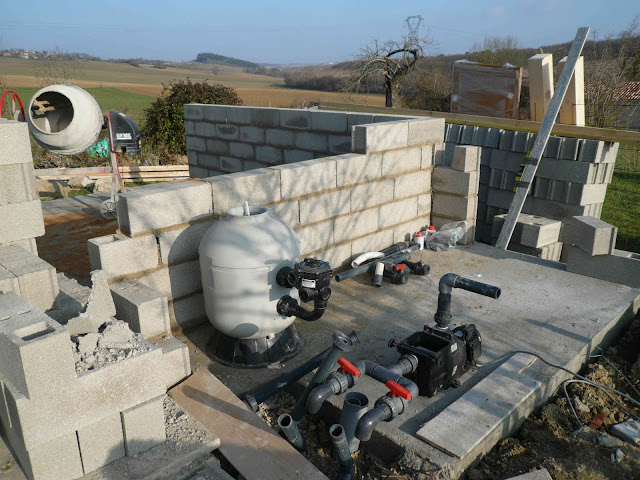 Link:Butterfly border
Posted by suej at 12:05 No comments:

Twice recently friends have commented on "the face" I've made.

I think I know "the face". It was my mother's and now it's mine.

I forget how old I have become and have no-one to remind me. No children to say "Oh Mum!" No workplace with younger, sleeker colleagues. Only a mirror that I barely glance at as I hurry past, heading for the garden in comfortable jeans.

She is still inside. The young girl in the party frock.

Yesterday the normally placid River Lot was raging over the weir at Clairac.

Waves were breaking over the safe, shallow beach where parents bring their toddlers to paddle during the height of summer. We stood on the terrace alongside the restaurant where we've danced on hot evenings and looked down on great tree trunks rolling in the turbulence.

The rain of the last few days has met the snow melt waters coming down off the Massif Central and the torrent presages spring.

... summoning up the courage to go shopping in Leclerc for the weekend.

Saturday afternoon, Leclerc is like a social club.  Whole families shop.  Teenagers bicker.  Husbands tell sullen wives (who have shopped alone all week) what to buy. Portuguese and Spanish farm workers form loud gaggles with kids and trolleys blocking the isles, catching up on the week's gossip, quite unconcerned at the glares from other shoppers.

Normally I go Friday about one-ish, when the shelves are being stocked for the Friday afternoon rush and the French bourgeoisie are still finishing their lunch.  The only downside is trying to find someone prepared to serve on the fish counter and only having two tills open - one for less than ten items and the other for "priorité pour handicapé".

And from Friday lunchtime onwards we were spring-cleaning the cottage.  For months we have been waiting for the accidentally sand-blasted cottage windows to be replaced and finally there has been progress.  Although not our insurance claim (this is the responsibility of our builder) nevertheless we were informed that an insurance assessor was coming round at 17.15 and we suddenly realised that we could be seen to be party to a fraudulent claim.  So we cleaned every window, swept, polished and tidied as if the Queen were visiting.  The young man was fierce and very much on his dignity (as only young Frenchmen can be) and carefully inspected every gleaming pane.   Finally he pronounced himself satisfied and (much to our relief) confirmed the claim can go ahead.

This left us with half an hour to get nibbles made and Tod fed and out the door for a bridge evening.

After that there was no way I was going supermarket shopping. Surrounded by a clean and tidy house, I collapsed in front of the television with Vita and watched an old episode of "Grand Designs" and the first two episodes of the final series of "Lost". Bliss.