In the day to day
I lose sight of what we have.
My mind on the “oughts” and “musts”
I forget the quiet thrum
Of our joint lives.

Late at night
Alone in the dark
My mind soothed by the gentle snores
Of man and dog
I remember.
Posted by suej at 09:51 2 comments:

Sound of someone eating warm, perfumed, sweet (so sweet) apricot straight off the tree. 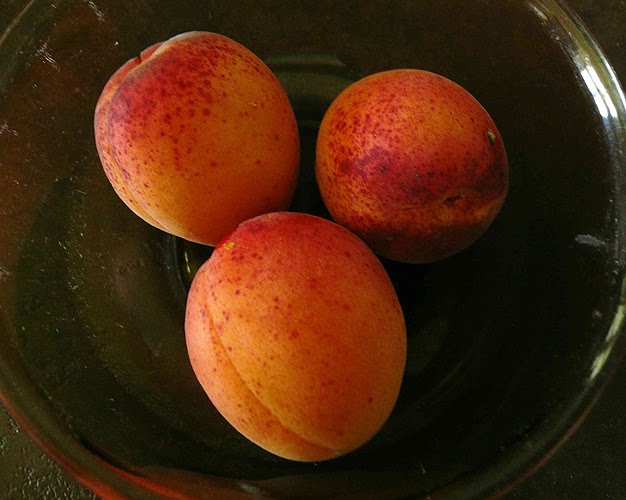 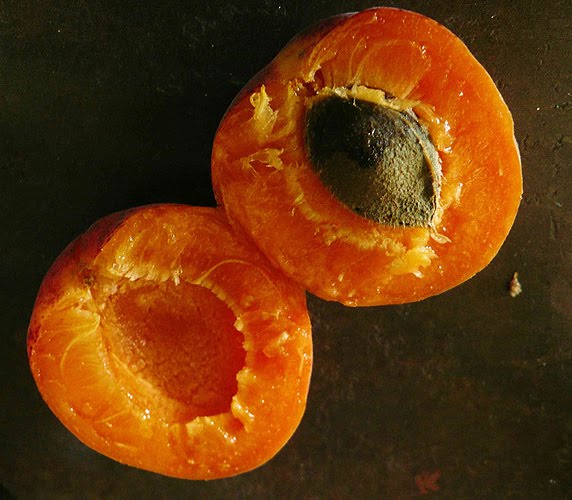 A few weeks ago, one afternoon just before we moved back into the house from the cottage, the house veranda was a mass of swarming bees high up in the rafters.  I called Heather and Jim who know about these things, but by the time they arrived the bees had largely disappeared except for a few who were exploring under the new roof. We worried whether the bees might be setting up house under the tiles (not a good idea) but by the next morning there was no sign of activity and so we forgot about them.

Until a couple of weeks ago, when I found them again.

When the cottage was being built, we needed a separate water spur and meter off the mains.  So a hole was dug in the drive and a small lockable green plastic man hole cover was placed on top of it.  The lockable idea was a mistake, because at some point during the build someone needed to get at the meter and the lid was just wrenched off.  Ever since the cover has had a gap where the lock should be.  The water hole is partly on the drive behind the house but tucked away under overhanging elm and cornus branches from the bank below Monsieur F's field. Weeds grow up round it and it gets forgotten for months.  But I thought it was time I cleared the weeds.

And there they were.  The bees.  Going in and out of the gap where the lock should have been.

So it was time to call Heather and Jim again.  Because there was no way anyone was going to be able to read the meter.

Yesterday afternoon, in warm sunlight, the bees were moved to their new home. 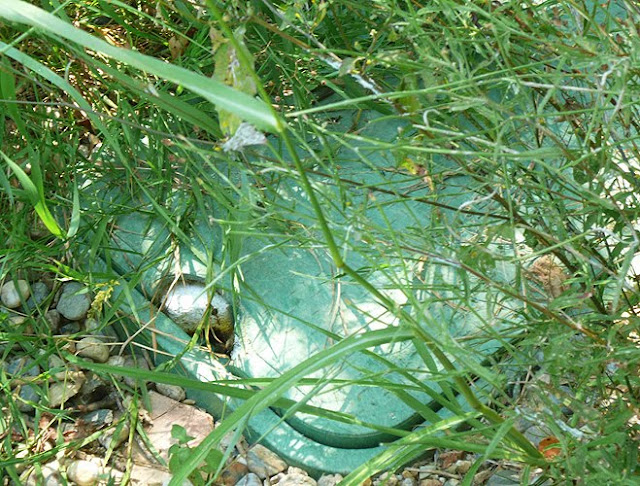 The bees going in and out. 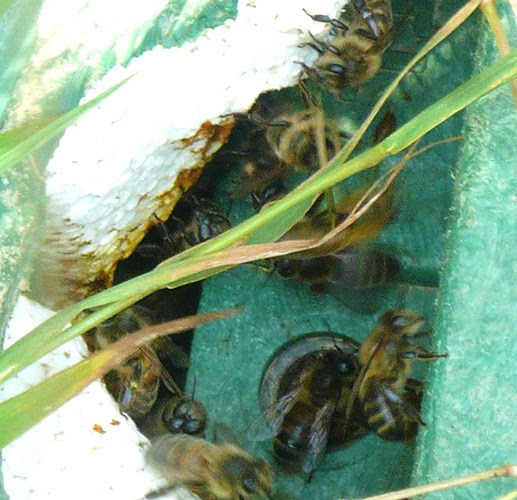 Puffing smoke into the hole to help keep the bees calm. 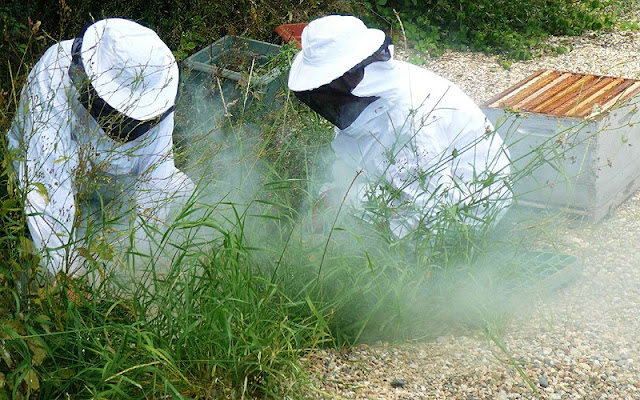 The comb was heavy, weighing down the lid and it needed quite an effort to lift it. First sight of the comb. 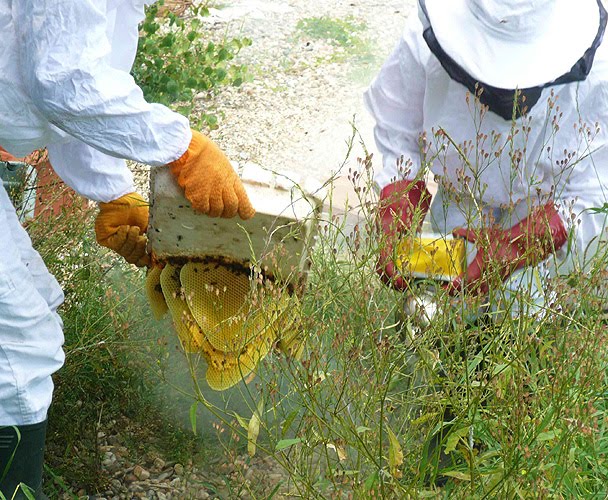 Transferring the comb to the hive. 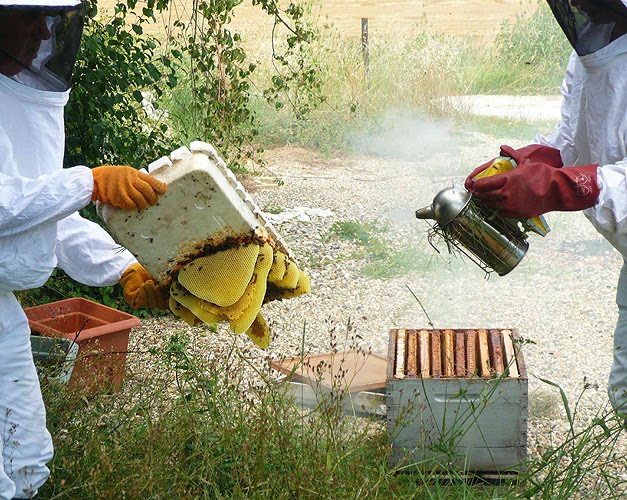 Removing some of the hive frames so the comb will fit. 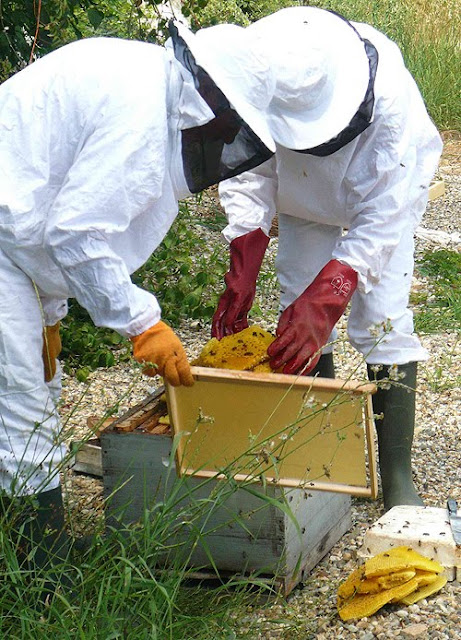 In lifting the lid unfortunately some of the comb broke away because it extended right to the floor of the chamber. So there was more comb to lift out and transfer to the hive. 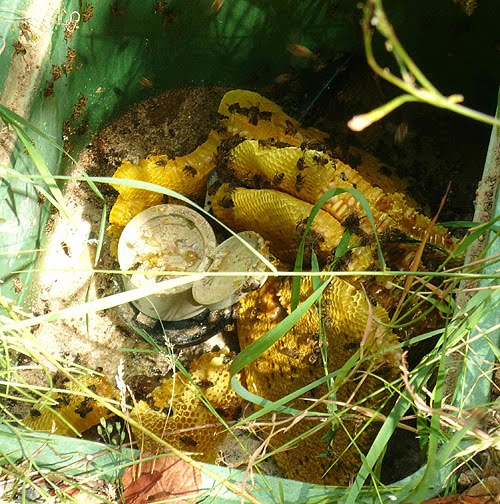 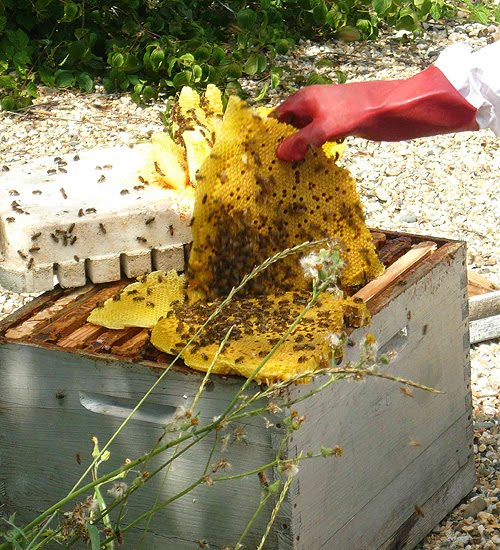 The bees were active all round us. However, the buzzing was always benign and we never felt threatened. We didn't see the queen but the bees very quickly started going in and out of the hive, which implied that she had been transferred with the comb. 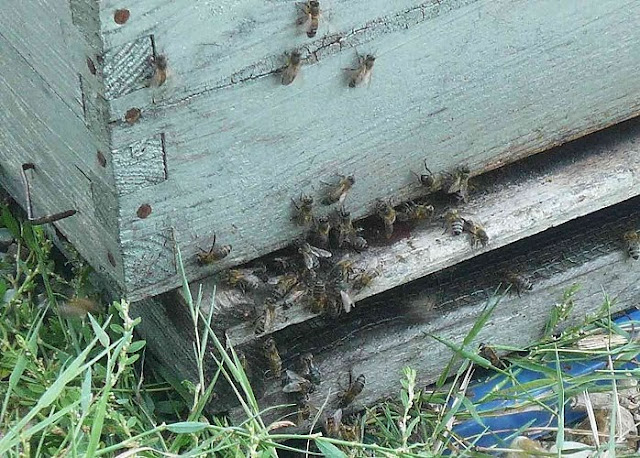 A few bees stayed in and around the water meter hole and began to form a cluster, so we wondered (briefly) if the queen was still there. We decided it would be good to leave the hive overnight and for today so that the bees could settle.  Our friends will close the hive tonight and take it away when most bees will be back from foraging.

This morning the hole is largely empty.  The bees have just been cleaning any residual comb still in the hole.

And there was even some comb with sweet clear honey oozing out for us. 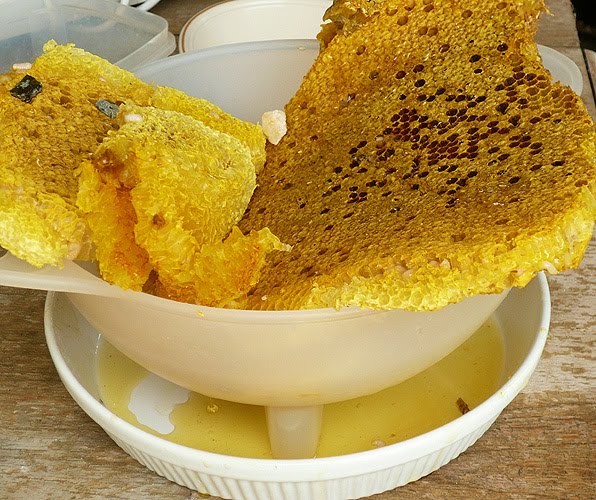 Thank you Heather and Jim.  A great job done.
Posted by suej at 11:21 No comments:

Sorting out our lives ...

... between the house and the cottage progresses in a series of lurches.

Friends come to supper and to see what we've done in the house and so we rush round opening more boxes, putting out a few more books, pictures, ornaments, hiding the empty cartons and crumpled paper in the attic.

After they've gone, we slump back into indolence.

This week we have friends arriving to stay, so another lurch - this time to prepare the cottage - is necessary.

For years - like camels with twin humps - we have carried more stuff than we need (the effect of merging more than one household) from one house move to another.  Now, finally, we have the opportunity to split the stuff between the cottage and the house.  But oh, what a task!

This set of table mats here, that set there (except there's a solitary coaster that missed the move and is in the wrong place).  These round trays won't fit on the shelf in the house kitchen, would they be better in the cottage?  How many baking trays will people on a week's holiday need?  Do we give our guests the set of matching saucepans (will they even notice?) and keep the scruffy mixed set for ourselves?  Why is there only five of everything and not six?

We have too many wardrobes, so two stay in the attic.  And so many occasional tables. At what stage in our lives did we think that number of occasional tables was necessary?  And we don't have anything useful like spare good double beds, or attractive dressing tables.  So the cottage bedrooms look strangely mournful with small single beds, a wardrobe and not much else.  Well Tod's left his electric piano in one bedroom, so any insomniac musical guests should be fine.

Everywhere needs dusting, sweeping and de-spidering.  How quickly the spiders move in.

The cooker still needs a good clean.  But joy of joys, yesterday in the late hot evening, I de-frosted the fridge.
Posted by suej at 13:00 No comments:

A strong wind blows from the south but it is too hot to bring much relief.

Vita lies on the tiles in the dining room catching what little breeze there is through the open doors of the lounge french windows and the kitchen.

I slip out to turn off the hose that's watering the roses by the pool but she's too hot and sleepy to get up and follow me.  I've been pruning the clusters of dying rose heads, brown and dried, the hips already fattening below the few remaining petals. Pruned now, they will reward us with a second flush but the new growth is touched with mildew and white fly and I think the bushes are stressed from the lack of rain.

We're leaving the cover off the pool at night in the hope that it will cool down. Tod grumbles that at thirty degrees the water no longer refreshes when he dives in.

A pale sun occasionally pushes between the thunder clouds that drop no rain. The distant ongoing rumbling sounds like people moving the furniture upstairs.

Monsieur F has the water canon going constantly on his maize and sugar beet.  The water splashes over our chemin rural and runs milky white down onto our drive where it sits in puddles.  The ground is too baked to absorb it.

We ought to be cleaning and tidying down at the cottage for our soon-to-be-arriving guests but it is easier to stay in the relative cool of the house with its thick old walls.

The météo forecasts rain for the first day our guests are here.  Tough for them, but we (humans, plants, dog) will welcome the change.
Posted by suej at 17:53 No comments: