There's an apocryphal story in São Paulo that women in Rio wear their fur coats when the temperature drops to 70°F.

Tod tells me when he was in his early twenties and came down to Biarritz he  found the weather deeply depressing.  Expecting to lie on the beach all day in glorious sunshine, most days low cloud swept in and hung around until late afternoon.  Tough for tourists (like those yesterday in Leclerc, wearing most inappropriate clothing), but wonderful for locals who are able to get on with their lives in relative comfort.

We've had such a day here and I've gardened with pleasure all morning.

And the Cariocas in their fur coats?  The difference between the 100°F of the last few days and the 70°F of this morning means that I've been wearing long trousers and a sweater.

Yesterday, for the first time ever in our twelve years here, we walked into the post office in town and it was empty. Three counter staff lounged around chatting and greeted us warmly.  Again, a first.

Normally we avoid the local town post office like the plague.  It always takes at least twenty minutes to get served and it has a deeply frustrating system of different queues that wind round various marketing displays, so it's almost impossible to work out which is the shortest and (not necessarily the same thing) the fastest.  I invariably pick the wrong one.

Our preferred option is a tiny sub-post office in a village ten minutes drive in the opposite direction.  The post-mistress is plump and cheerful and her office acts as the local bread collection point when the scruffy, badly stocked little supermarket in the village centre shuts in high summer.  It still takes ten minutes to get in and out, even if there is no-one else there.  But we engage in cheerful conversation (good practice for my French) while she taps about twenty different keys just to tell me how much my parcel to the UK will cost.

But yesterday it had to be the one in town.  The Chronopost delivery man (I suspect it was the man, the woman is more accommodating) had made no attempt to deliver Vita and Bertie's dog food and had just dumped it at the post office. (Much to their regret as they enjoy getting into the van to help find it.) It's true he may have tried to phone us to see if we were there (we were) but we have given up answering our phone.  We are suffering an endless stream of nuisance calls which vary in content from silence, to a recorded message, to a "press one to speak to someone" and then nothing, to speaking to someone who talks too fast and won't listen.  We gather we are being offered, under government edict, loft and basement insulation for one euro.  The offer lasts until the end of June and after that we are hoping for some peace. Curiously, we may be eligible, but we are so irritated by the number of times the phone rings (three times since I started this blog) that it has become almost a point of honour to refuse it.

We may live to regret our stubborn refusal.  Driving back from town yesterday the car thermometer hit 41.5°C (that's over 106°F).  And the météo says it will be even hotter by this evening. In future years we may need that insulation. Not for warmth, but to help keep the house cool.

In the heat of the mid-day sun yesterday our town was virtually deserted. People are taking their cue from Paris where schools are closing, polluting transport is banned and residents are being encouraged to stay indoors or seek air-conditioned sanctuary.  Leclerc's cool cabinets and freezers are irresistible in this weather.

We are lucky. Our old farmhouse has thick stone walls and we keep shutters closed and manage to create draughts by opening french windows facing north and east.  Vita lies on the tiles in the kitchen, strategically placed across one such draught.

We have had heat waves in previous years but never to this degree.  Welcome to a brave new world.
Posted by suej at 15:33 6 comments:

It's only taken twelve years ...

... Well there's no point in rushing these things.

All our friends have done it.

They all said life would be so much easier if we did it too.

And we'd save so much money.

We thought about it, but there was an added complication with the merc and it would be expensive.

And then the years slipped by and as we still hadn't done it there didn't seem to be much point.

But then we bought the Skoda and it came already equipped and suddenly it seemed to make sense to do it.

So we borrowed one from a friend and four trips to the gravel pit and two to the town tip later, we found (of course) everyone was right. 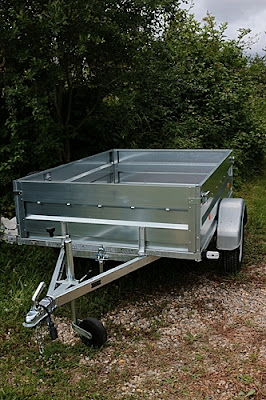 (The Skoda comes with a tow bar, whereas the merc needed one fitted and we baulked at the cost of fitting the tow bar and buying the trailer. We now know better.)
Posted by suej at 12:43 4 comments: