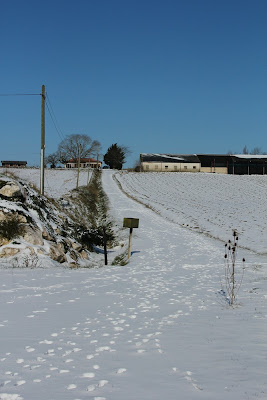 The chemin rural that runs from our house up to the road along the ridge has a thick layer of pristine snow - except where Bertie and Vita have been playing tag.  We've been eyeing it anxiously and we'd decided we were going nowhere this week: no French lessons, no bridge classes, no photo club and (importantly) no food shopping. And no one getting down to us either. So no post and no delivery of internet-bought dog food.

Then George phoned and said they were going into town and could drive past along the ridge, picking us up on the way.  Carrier bags in hand, wrapped in five layers of clothing, I stomp in my wellington boots up to the barn at the top.  We inch cautiously into town on a mixture of packed down snow and slush.  George had tried to fit snow chains but the "three minutes to fit" marketing claim proved to be a little optimistic and after half an hour of trying he decided to go for the tried and tested "thick piece of rope tied round one wheel" solution.

Looking at the météo and seeing another week of this, I decide not to stint on the stocking up and include with the usual comestibles a big sack of salt, replacement dog food for the non-delivered bag, a set of snow chains spotted in Leclercs, flour for Tod's home-made bread and a fat cabbage and large butternut squash.  It didn't seem much when I was buying it, but I finish up with half a dozen heavy packages. George gallantly insists he's not leaving me at the top of the chemin.  The piece of rope round the wheel had coped with the worst that the route into town could throw at us. He would get his car down the slope, at least to the front of the house.

He then improvises a sled from a pallet he spots in our garden and rope round his waist like a Sherpa slides all the shopping down the last steep bit to the cottage.

By the time everything's indoors, he's gone and I hurry back up to the chemin, to watch his small green car in the distance like a beetle on a white tiled surface, hanging almost motionless, inching its way slowly and painfully up the final incline onto the road.  He tells us on the phone later that this was the moment the redoubtable piece of rope gave up the ghost, as the car slewed dangerously sideways towards the ditch, before heaving up onto the ridge and disappearing with a cheerful toot.

I don't think anyone else will be driving our chemin any time soon.
Posted by suej at 17:50