In the middle of the cold snap we were contacted by the mayor of our local commune. As a result of his call, I walked across the snowy fields to meet our neighbour; to be told our dogs had killed their baby goat.

No, they did not see it happen. But they had previously seen the dogs, Bertie especially, roaming their fields and teasing their livestock.  My heart bleeds  for the family and for our dogs.  Kind friends give us the benefit of the doubt and Tod does not want to believe it. Maybe it was a fox during the depth of the cold.  I fear though that it is all too possible. Anyway it is my complacency and naivety - letting Bertie wander and thinking it was okay because he eventually came home - which has placed us all in this dreadful position. We cannot prove otherwise. We have to take responsibility for it.

We've paid for the goat, of course, but that is only part of it and barely touches their anger and distress.  We are fortunate our neighbours went to the mayor.  The husband belongs to the hunt and it would have been quite possible for him to have shot the dogs the next time he saw them.  We promised that from now onwards the dogs would always be on the lead when we walked them and we would find a way to fence them in.

It has been a harsh new world for Bertie who walks four miles to our one, nose to the ground, tail wagging frantically, zig-zagging backwards and forwards chasing enticing smells or racing after blackbirds in the hedges.  Now he is forced to walk alongside us. Every few minutes he runs the length of the lead to be brought up short and held back to our slow speed.

Our land covers two hectares (that's about five acres) and includes garden, field, bushes, trees, hedges, banks and old buildings to explore.  Somehow we need to give him / them (though Vita's less fussed) freedom to race and chase through this terrain but keep them constrained and our neighbours' livestock safe.

We cannot afford to fence the entire boundary and the nature of the land, with its access points for tractors to cross the fields, plus its steep banks and gulleys, would make fencing a challenge.  So we're opting for "electronic fencing" where we will have a wire on the ground and the dogs will wear a collar that gives them an initial warning buzz and then a mild shock if they go too close to the perimeter. Hopefully that way they will gain a controlled freedom.

In the meantime, we do have the garden up at the house fenced and as it's a warm sunny day, I went round checking that the fence was secure and took both of them up on the lead.  They could play around safely while I pruned some roses.  It took Bertie thirty seconds to disappear behind the wood store, jump over the gap I thought I'd plugged and reappear the other side of the fence heading for the bank and Monsieur F's field beyond.  Fortunately, if called early enough and with sufficient enthusiasm before he gets "in the zone" of the hunt he can be persuaded back.

I went round the other side of the wood store and realising where he was getting out, I fixed some chicken wire across the gap.  He watched me do it from the safe side of the garden.  As I finished, I turned round to find Vita standing grinning behind me!  She'd found a way out of the garden (heaven knows where) and was checking on my handiwork. So I hauled her back inside, restored calm and started pruning.

Ten minutes later a small truck climbed towards the brow of the hill between Monsieur F's fields and the two of them raced the length of the garden fence.  But Bertie didn't stop.  He dived across the garden and disappeared under the honeysuckle covering the well to re-emerge the other side of the fence heading up our chemin rural.  In the  four and a half years of being here (with dogs) he is the first to have discovered that the fence stops short of the well and there is a gap under the honeysuckle.  And what's more, he's taught it to Vita. So that's how she got out.

After more excited calling from me he came back.  I decided this was all too much for my already jangly nerves. We've come back down to the cottage (on the lead) for a cup of tea.  I do so hope that the electronic fence works! 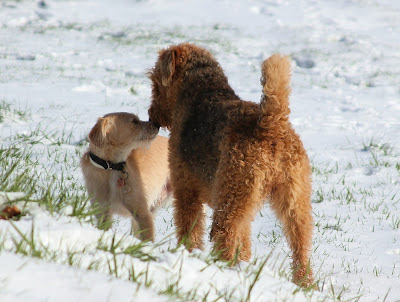