With the cottage we rushed round buying things at the last minute.  For the house we plan to be more organised and are already getting ideas for the kitchen.

So Friday afternoon we went to Cuisinella in Villeneuve and spent two hours looking at façades, worktops, taps and playing around with ideas for a layout.  We made a good start and left later than we'd intended.

We had an appointment at the house with the builder at five and hurried to get back. Along the empty roads that cross the Lot and Garonne valleys, no one behind and the road ahead totally clear, it is all too easy to speed at more than the legal 90 kilometres an hour.  And then we saw the flash; a roving police radar trap hidden behind bushes waiting for the Friday afternoon dash home.  And we thought they only did it to annoy tourists in the summer!

Bizarre.  On the main roads you are politely told with a sign whenever there is a fixed camera ahead, giving you time to slow down, but there's no warning of the roving traps, other than (if you're lucky) a quick flick of headlights from the occasional car coming towards you.

Ah well.  No doubt the letter will be in the post this week with points on the license and a fine. 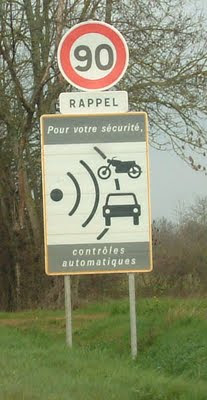