Thursday, Smudge and I went on an awfully big adventure to the Mediterranean. We live close to the Autoroute des Deux Mers motorway which stretches from the Atlantic to the Med. So I get this restless feeling from time to time - a tug at the heart for sea air.

I've been to Bordeaux in the west. It was time to visit Narbonne in the east.

As Smudge ages, he becomes an easier passenger. He spends most of the time sleeping on the back seat, except when we stop for motorway tolls, when he sits up like his old self and protests.
He slept as we swept over the brow of the hill that looks down over Toulouse and, to my joy, there ranged in the distance in all their hazy blue and white glory - the not-often-seen Pyrenees. For the rest of the journey they played hide-and-seek, as we headed away from the lush pastures of the Garonne valley and into the scrubland of their foothills.
Narbonne is three hours away according to Google. With frequent pit stops it took us four; plus another half an hour getting lost trying to find Narbonne Plage.

We looked at the sea and the almost deserted beach, breathed in the salt air, noted the sign that said "no dogs on the beach" in three languages, said "bonjour" to several people on bicycles and two elderly dogs. Smudge lay down on the pavement by the smart new maisonettes all painted in dark burgundy glowing in the late sun and told me that he'd had enough. So I carried him to the car and walked back alone, across the wet sand. Dog footprints showed me that the locals ignore the sign.

I watched a woman striding out towards the sunset and suddenly realised that there, in the distance, a hint of blue up where the clouds should be, the Pyrenees touch down to the sea.

And then we came home. 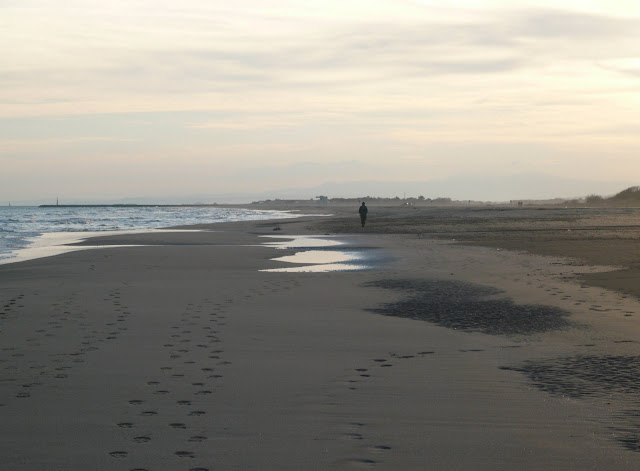