The young woman steps out of the kayak at the edge of the water and onto the road. The young man (presumably her husband) follows with the paddles and drags the canoe onto the muddy verge.

"C'est pénible!" she says as she reaches me. "It's painful" doesn't quite convey enough of her distress as we look back along the flooded road to where brown, twig-filled water swirls around her house.

In brilliant sunshine (the first in what feels like weeks) small groups of townsfolk stand on the belvedere in the town centre, looking down over the flood plain.  Water glistens in the fields as far as the eye can see. Isolated farmhouses stand as small islands. 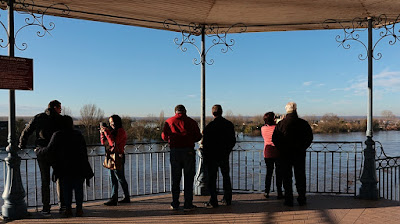 Families, camera phones raised in all directions, wander across the bridge in the middle of the empty road, passed by the occasional gendarme and rescue vehicle. Elderly men in caps, swap anecdotes about which of the floods has been the worst and lean over the balustrade to watch the thundering water fight its way under the tops of the arches, great branches packed with debris banked up against the pillars. On the far side of the bridge the water laps across what was once a road heading south. 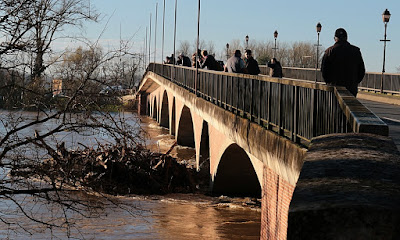 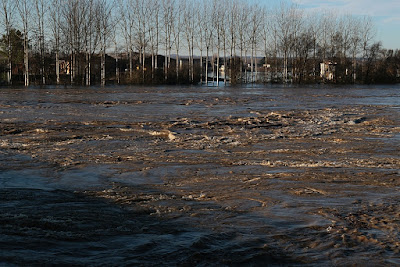 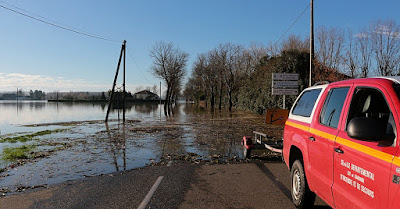 After two months of rains, the land is finally saturated, brooks and streams are filled to overflowing, pouring into the two big rivers.  The sirens first sounded two days ago when the Garonne initially broke its banks and the water's been rising ever since. This morning the record height of 9.04 meters (29.6 feet) set in January 2009 was broken. By nine o'clock this evening the vigicrues website reports 9.25 meters (30.3 feet). Fortunately the level is beginning to fall back.  The graph peaks well below the 10.72 meters (35 feet) of March 1930.

Hopefully the young woman and her husband will only need the kayak for a few more days. 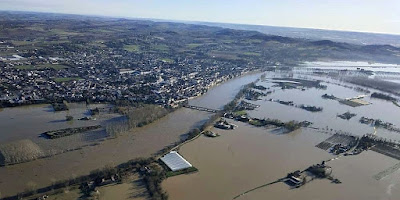 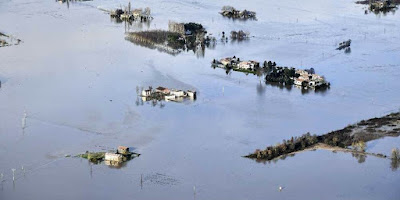