We are dog-sitting Guccio, a large shaggy Italian Spinone while his master does a week's tango workshop in the foothills of the Pyrenees.

Guccio does not like storms. So he wedged himself under my desk amongst all the trailing wires when the distant thunder started yesterday evening.

By midnight I decided we should go to bed. In the time it took me to clean my teeth Guccio had settled himself on my pillow. He's big. But I managed to tug him down off the bed. So he went round the other side and climbed up again. We did this a few more times until he finally agreed to lie down at the side of the bed on top of a spare duvet.

Lights out, we doze off for a while until the rain, thunder and lightning start in earnest. He is panting hard and I fetch him some Rescue Remedy. Vita, who has been sleeping by the bathroom on the cool tiles, follows me back to see what's going on.

Guccio, still panting loudly, now decides he'd rather be inside Vita's crate. She pops her head in, decides there is nothing she can do to help and quite unconcerned by all the noise and the flashes settles down to rearrange the duvet. Then the power goes off. We find torches and try to sleep. Guccio by this stage has his head jammed under the bedside table and Vita has curled up alongside him.

He continues to pant and as the storm begins to move away I reassure him that it will soon be over.

We doze and then the next storm arrives. This time the rain is pouring through the gap where the roof over the lounge meets the roof over the bedroom (which used to be the cow shed). Padding about with a torch, I find a couple of the Sainsbury's shopping boxes that we brought with us from the UK (immensely useful for carrying tools) and put towels in the bottom so that the dripping from the beam high above is muffled. Vita stretches out asleep. Guccio pants and I pretend to be brave. Again, I reassure him it will soon be over.

When the third storm arrives I don't think he believes me any more. This time, in the dark, I can hear the water dripping in different places, from the other side of the room. I flash the torch and see rain water seeping through the cracked beam above the window. The window used to be a door on to the veranda and there are steps up from what was the cow shed, now bedroom, floor. I keep my shoes on the steps where the water is now dripping. I'm too tired to get out of bed and move them.

I turn the torch off and realise there is another drip - closer. The water's coming through the ceiling where a big beam crosses the room. The end of the bed is wet. I wonder about getting a pail or something, but don't have the energy to get up.

I finally drift off thinking of Goldie Hawn in the film Overboard, lying on a sofa trying to get to sleep holding buckets to catch the rain coming through the roof.

And I said in my blog last night that a storm would be a welcome relief! 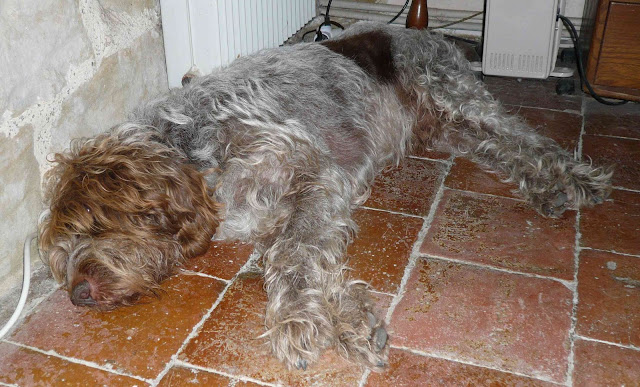